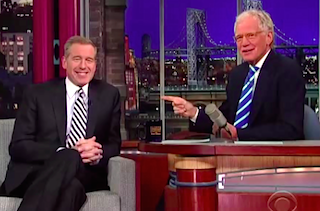 The Late Show with David Letterman was one of the first places that Brian Williams told the exaggerated story about riding in a helicopter over Iraq that led to his six-month suspension from NBC News. Could it also be the place he comes to redeem himself?

With Letterman stepping down from his Late Show post on May 20, he is reportedly making a concerted effort to get Williams on as one of his final guests. If the host manages to convince Williams to make his first television appearance since the controversy, it will likely provide a major ratings boost to his already-highly anticipated last week of shows.

According to The New York Times’ Dave Itzkoff, Letterman discussed the invitation during Monday afternoon’s taping:

Letterman also confirmed the rumors that he has invited former late night rival Jay Leno for a sit-down during the final run of episodes:

Also: as recently as last week, Jay Leno has been invited to appear on one of Letterman's last shows. Ball is in Leno's court, apparently.

Leno, who was one of Letterman’s most frequent guests before he took over the Tonight Show from Johnny Carson, said last year in an interview, “I did Dave’s show a million times and I would probably do his show again, sure.”

As for Williams, Letterman did not lay off making jokes about the NBC News anchor at the height of the scandal, but he has also expressed support for him since. During an interview with Bill O’Reilly last month, Letterman appeared to agree with the Fox News host’s assertion that NBC should bring Williams back.

Watch Williams’ fateful 2013 appearance on the Late Show below, via CBS: