Megyn Kelly Grills NY Times Op-Ed Author Who Wrote That U.S. Should ‘Give Up’ On Constitution
video

Megyn Kelly Grills NY Times Op-Ed Author Who Wrote That U.S. Should ‘Give Up’ On Constitution 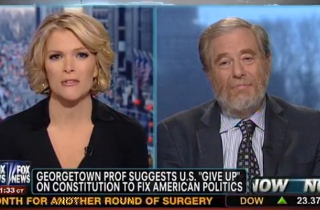 Appearing on Fox News’ America Live this afternoon, Georgetown professor Mike Seidman took a grilling from host Megyn Kelly over his recent New York Times op-ed which suggested the U.S. “give up” on the Constitution and its “archaic, idiosyncratic and downrght evil provisions.”

Seidman began the interview praising Kelly for allowing him to come on the show, despite the fact that “a the lot of viewers don’t agree with what I have to say.” In turn, Kelly praised the “thought-provoking” and “interesting” nature of the controversial op-ed.

The Georgetown professor then explained his basic thesis as such:

“This is our country, we live in it, we have the right to have the kind of country that we want. I don’t think most Americans would be happy with the French telling us what kind of government to have, or the British, or the United Nations, or the Russians, or some law professor. It’s our country and I’m not very happy with having a bunch of folks who have been dead for over 200 years, a very small group of people who were not the even representative of the time of the United States, telling us what kind of country we have. We have a right to decide that for ourselves. Now there are a lot of things they got right and when they got them right, we ought to do them because they’re right. But we ought not to do that just because they said we need to think about all of that now and what’s best for Americans now and not what was best for them in 1789.”

Kelly then challenged the professor on why, instead of ditching the Constitution altogether, can’t we just follow Article V and amend the document as needed?

“Of all the constitutions in the world, the American Constitution is the most difficult to amend,” Seidman replied. “It’s only been amended 27 times, only 17 times if you don’t count the Bill of Rights. It hasn’t been amended recently at all.”

The host then argued that she believes Seidman is arguing for “majority rule,” which she finds “problematic” because of the shifting political whims that could make for inconsistency in lawmaking. The law professor pushed back that in no way was he arguing for majoritarian rule.

Instead, he said, his ideal government boiled down to universal respect for rights, citing gun rights as an example:

“If civil liberties, First Amendment, Second Amendment, if those are going to be secure in the long run, they cannot be secure if the American people are just told, ‘This is the way it’s got to be, whether you like it or not, because some dead people a long time ago said so.’ The way it’s going to be secure is by our defending it now and convincing our fellow Americans that these are rights that we ought to cherish. If we don’t do that, then in the long run, they’re not going to survive anyway. For example: I happen to be against most forms of gun control, but if you ask me why I’m against it, it’s not because of what the framers said 200 years ago, it’s because I happen to agree for the most part with what the NRA says today about how [gun control] is just not likely to work, not likely to be worth the cost if it does work. Now what happens if you turn that question into a question of constitutional obligation? Well, then the lawyers get hold of it and the lawyers do with this kind of thing what lawyers do.

Kelly then confronted the professor over whether government would resist overreach without a constitution in place. “I’m not even saying that we shouldn’t have, for example, a Supreme Court, which is a matter of political morality, which stops the government from overreaching,” he said. “I do think that if we have a Supreme Court, they ought to be honest about what they’re doing so that when they decide cases like cases about gay rights or about affirmative action, they stop pretending that they’re getting those outcomes somehow from the constitutional text, which is nonsense.”