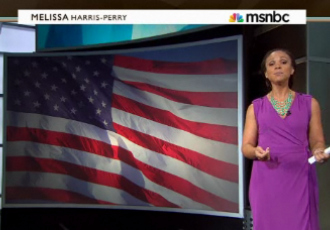 In what is sure to rankle the feathers of many conservatives, MSNBC weekend host Melissa Harris-Perry took to her show Sunday to ponder the meaning of Independence Day, highlighting mostly the stains on American history. “It’s ours, all of it,” she said. “The imperialism, the genocide, the slavery, also the liberation and the hope and the deeply American belief that our best days still lie ahead of us.”

“Independence Day is more aspirational than actual,” she began her monologue. “We have longed defined the American Dream with commodities, a home of ones own, better education for the kids, family vacation and a car to the vacation in. And if we measure the dream by acquisitions, we’re in trouble. National unemployment remains above 8 percent. Wages have dropped, and the median net worth of American families plummeted by almost 40 percent.”

Harris-Perry noted that “financial security is important, but it’s only an outward manifestation of the American Dream. Freedom itself is both more elusive and more complicated.” She explained that America’s founding wasn’t about profits and loss but that “our founding is an unlikely narrative of young men, so inspired by an age of ideas that they threw off the yoke of colonialism and founded a free nation — men who were embarrassingly imperfect.”

The imperfections she listed: “The land on which they formed this Union was stolen; the hands with which they built this nation were enslaved; the women who birthed the citizens of the nation are second class.”

“But all of this is our story,” she continued. “Each of us benefits from the residuals of oppression and each of us is harmed by the realities of inequality. This is the imperfect fabric of our nation, at times we’ve torn and stained it, and at other moments, we mend and repair it. But it’s ours, all of it: The imperialism, the genocide, the slavery, also the liberation and the hope and the deeply American belief that our best days still lie ahead of us.”

She continued on to explain that her favorite story for this Fourth of July is one of people who are “not technically free.” She described a group of 27 inmates who recently completed their GEDs at the jail on Rikers Island. “Despite being incarcerated, they hold fast to the optimistic belief that education, hard work and second chances are still the stuff of America. And that they have a right to take part in the dream.”

“So on the Fourth of July,” Harris-Perry concluded, “I’m going to think of the Rikers Island graduates, and I’m going to wave a flag without hesitation — not because I’ve forgotten my nation’s many wrongs, but because I remember them. And I am nonetheless proud of my country, not for its perfection, because the alternative is too grim, the alternative is to give up on the dream of the nation founded in the belief, if not yet the practice that all are created, all deserve freedom, and all have the right to pursue happiness. Now, that is a dream worth celebrating — with fireworks.”