Michael Moore Tells Wealthy Their Money Is ‘A National Resource, That’s Ours’ 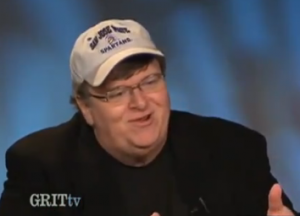 Liberal activist and filmmaker Michael Moore sure knows how to stir the pot. Yesterday in response to interviewer Laura Flanders asking Moore what should Republican Governor Walker do to address the state of Wisconsin’s budget deficit, Moore didn’t hold back with what he thought should be a simple solution: it’s time to share the wealth.

Moore elaborated on how he believes wealthy people and corporations are the real roadblocks for economic recovery:

“We’re not broke. This country is not broke. The state of Wisconsin is not broke. There’s a ton of cash in this country. . . . What’s happened is is that we’ve allowed a vast majority of that cash to be concentrated in the hands of just a few people. . . . They’re sitting on the money, they’re using it for their own – they’re putting it someplace else, they have no interest in helping you with your life, with that money. We’ve allowed them to take that. That’s not theirs, that’s a national resource, that’s ours. . . . I think we need to go back to taxing these people at the proper rates. They need to – we need to see these jobs as something that we own, that we collectively own as Americans and you can’t just steal our jobs and take them someplace else.”

Moore also urged liberals to quit whining about the current state of the Democratic party and instead said anyone discouraged should run for office. Although with his consistent and passionate willingness to rail against the excesses of capitalism, it’s unclear if any Democratic candidate could possibly satisfy Moore.

Watch the clip below from GRITtv: