THIS JUST IN: Charlie Sheen ‘Creeps Out’ Modern Family Actress On Twitter 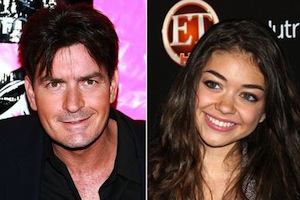 One of the most fascinating things about the amazing social experiment that is Twitter is that you can see who other people are following. This becomes especially interesting when a person is only following a few people and even more so when that person in question is famous. For example, see the Twitter accounts of Conan O’Brien or Kanye West, which both decided to follow one random person, thus thrusting that person into the limelight. A similar instance happened last night when Charlie Sheen decided to bestow the honor of his following upon Modern Family actress Sarah Hyland who then denounced the advance by saying she was “creeped out.” The Internet then erupted with three main responses: “Hooray for Sarah Hyland!,” “Who does Sarah Hyland think she is?,” and “Oh my God, how old is Sarah Hyland?”

(Before we wade into this story, let me just say that I completely recognize the irony in doing a post about Charlie Sheen’s Twitter directly after doing a post on Glenn Beck eviscerating the media for focusing on Charlie Sheen’s Twitter. However, I find these new rules of social etiquette that social media has forced upon us to be fascinating. I also find celebrity Twitter spats to be hilarious, be they involving Charlie Sheen, Michelle Malkin, or the Dalai Lama who, surprisingly, drunk tweets all the time.)

So, here’s what happened. Charlie Sheen’s much ballyhooed Twitter account (if me using the word “ballyhooed” directly next to the word “Twitter” causes any temporal cognizant dissonance in anyone, I apologize) is currently only following a few people. That’s unsurprising since he’s admitted that he’s only using the service for the money (further proof that his “craziness” is mostly just an act and, thus, only partly the sad, slow mental breakdown of a beloved Hollywood icon). What I did find surprising is that a few of the people he’s following are comedians who have been filling their feeds up recently with Charlie Sheen jokes. What other people found surprising was that one of the people followed was Sarah Hyland.

Why did people find this surprising? Well, part of it is because people will find any reason to talk (or, ahem, write) about Charlie Sheen these days. Mostly though, it’s because most people think Sarah Hyland is 16. On the incredibly popular series Modern Family, which she stars on, Hyland plays a teenager and many fans of the show have assumed she is. She’s actually 20 but looks the age of her character, so many were asking what Charlie Sheen, noted womanizer and friend of Goddesses, was doing following a high schooler. Again, for the record (and for whatever it’s worth), she is 20 years old.

Then Hyland tweeted this:

And, with that tweet, the true power of the Cult of Charlie Sheen was felt. From that small Tweet, Sarah Hyland was soon trending in multiple cities in America. Some, like TV critic Daniel Fienberg applauded Hyland. While many Sheen fans reacted…poorly. One frequently retweeted post asked Hyland if she “knew” every other one of her 36,000 followers while another simply read “Fuck you Sarah Hyland.seriously.” (I’m not linking to it, because it appears to be written by a teenage girl and, if we’ve learned anything from this story, that’s really creepy. You can find it if you feel like searching.)

Soon, Hyland was forced to delete the above tweet. She replaced it with this retweet about the non-troversy:

She then tweeted her own fairly hilarious response thusly:

So, what have we learned from this? First off, despite a growing backlash, it appears the public’s appetite for Sheen has not subsided yet. Secondly, celebrity Twitters are an unending source of amusement. Don’t believe me? Did anyone else see that Ashton Kutcher’s Twitter, one of the most followed accounts in the world for some reason, got hacked? 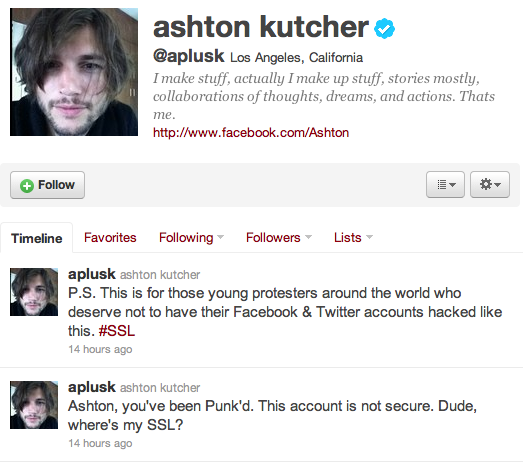