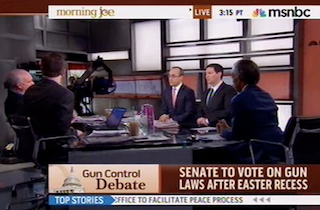 In light of New York City Mayor Michael Bloomberg announcing a $12 million gun control campaign (to push for background checks), the Morning Joe crew revisited the issue of guns and discussed the reaction to the Bloomberg as well. Disagreeing over whether the mayor is the right spokesperson for the cause, the panelists also clashed over whether there is some level of anti-Semitism directed toward him.

In the wake of the school shooting in Newtown, the sentiment across the country among gun control advocates was that it marked a moment when everything would change, Willie Geist noted. But that doesn’t appear to be the case: “Even Newtown” can’t get us to an assault weapons ban.

“When you look at Newtown, when you look at the deaths in Chicago alone,” Al Sharpton replied, “if we can’t do it at this moment, there is a real sense that it won’t be done.”

The attention is still on the issue, so the goal, he said, should be to get as much done as possible right now, while there’s still public support for some of these proposals. Senate Majority Leader Harry Reid, however, should be careful “on the changing demographics in some of those states…some of those states are beginning to shift, and some of the Democrats that are using caution may put themselves in danger of their own base if they are too cautious.”

Gun control advocates can’t be faulted for welcoming Bloomberg’s funding, Dan Senor chimed in, but “I’m not sure he is the right spokesman for this. He is galvanizing the Second Amendment rights community in a number of these red states.”

He’s providing the microphone, Sharpton argued — and while he may not be the ideal spokesperson, it’s hard for someone to provide the microphone and not be a spokesperson. Mike Barnicle, however, questioned that. “Who, though?” he asked. “Mike Bloomberg, mayor of New York City. I mean, there’s a level of anti-Semitism in this thing directed toward Bloomberg. … It’s out there.”

“No doubt about it,” Sharpton agreed, but Senor felt differently. The issue, he asserted, is “the perception of big city, urban elites, wealthy elites, telling the rest of the little people how to live their lives.”

“But if he was not a big city Jewish man…I think it would be different,” Sharpton said. If a law enforcement person were the face of the issue, it may be easier to get others on board, he added, prompting Kelly O’Donnell to note that Gabby Giffords and her husband Mark Kelly do approach it from a different angle.

The “big city divide” argument does have merit, she added. “It gets very, very personal.”