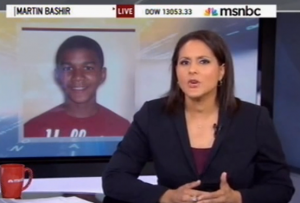 As the Trayvon Martin case continues to pervade the media, MSNBC contributor Karen Finney gave us her take. Citing racial comments from the likes of Rush Limbaugh and Newt Gingrich, she said those are the kinds of reinforced stereotypes that can have “lethal consequences.”

Guest hosting Thursday’s Martin Bashir show, Finney shared her own story, discussing the time when her father was pulled over by a police officer who asked, “Boy, you got some ID?” Never, she said, had she heard her father spoken to that way. Her father’s offense wasn’t speeding, Finney added. It “was that he was a black man driving a nice car” — which seemed out of place to the officer in the same way Trayvon Martin and his hoodie seemed out of place to George Zimmerman.

“Left unchecked or unchallenged,” Finney observed, “Our biases, bigotry and stereotypes take over our better judgment.”

Finney then went on to mention comments made by Limbaugh and the cast of GOP candidates, attaching some blame to the way they’ve approached race:

So, when Newt Gingrich, presidential candidate Newt Gingrich says that, quote, “really poor children in really poor neighborhoods have no habits of working, and have nobody around them who works. They have no habit of I do this and you give me cash, unless it’s illegal,” — or Rick Santorum says, “I don’t want to make black people’s lives easier,” or Rush Limbaugh calls a presidential candidate, Senator Barack Obama a “magic negro,” or Mitt Romney says nothing at all, the effect is dangerous. Because they reinforce and validate old stereotypes that associate the poor and welfare as criminal behavior with African Americans and people of color, calling us lazy, undeserving recipients of public assistance. In the case of Trayvon, those festering stereotypes had lethal consequences.