Nancy Pelosi Rebuts Her Snowden Hecklers On Meet The Press, Assures That Obama Is Not Bush 2.0
video

Nancy Pelosi Rebuts Her Snowden Hecklers On Meet The Press, Assures That Obama Is Not Bush 2.0 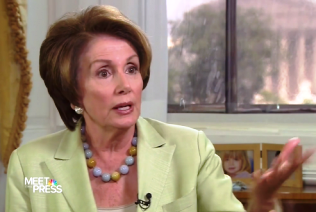 During an interview on Meet the Press today, House Minority Leader Nancy Pelosi addressed the ongoing international manhunt for NSA leaker Edward Snowden. David Gregory played video of Pelosi getting heckled while speaking at the progressive conference Netroots Nation for attacking Snowden. Pelosi dismissed it as a “smattering” of boos in the liberal crowd, and defended President Obama from the accusation on both the left and right that his second term is “the fourth term of President Bush.” She said that claim “couldn’t be farther from the truth.”

Gregory asked Pelosi if the country needs “more Edward Snowdens” to allow the public more insight into the NSA’s surveillance programs. Pelosi responded, “No, I think what we have to do is obey the Constitution of the United States.” She said there is an understanding in Congress that there needs to be a balance between security and liberty, and touted “obstacles” she has pushed for in legislation to prevent gross violations of people’s privacy.

One of the obstacles Pelosi cited was the Privacy and Civil Liberties oversight Board, a board established almost ten years ago that Obama first met with two weeks ago and which had previously only met once during Obama’s entire first term. Pelosi touted action that was taken by Democrats as soon as they took the House in 2006, and defended Obama from the accusation that he’s basically the same as his predecessor.

Gregory asked Pelosi how important it is to track Snowden down and “make him face justice.” Pelosi first shifted to criticizing national security contractors that work for the government, before making the bold assertion that Snowden has been “threatening, in any event, to share information with Russia and China.”