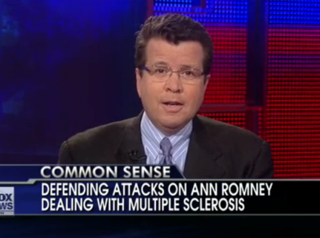 “I told myself I wouldn’t butt in,” Neil Cavuto told the audience today, before addressing those from “a network with MS in their name” over their mockery of Ann Romney‘s horseback riding. Romney uses horses for treating her multiple sclerosis– an illness Cavuto too has, which led him to explain the legitimacy of this treatment and chide the “condescending, sanctimonious twits” who refuse to acknowledge the legitimacy of MS as a disease and the need to deal with its shortcomings.

“Because I have MS, my comments might be taken with a grain of pity salt and more than a hint of sympathy bias. Well, guilty as charged,” Cavuto admitted candidly, explaining that this was why he tried to avoid commenting, but “I’ve had enough of condescending commentators on another news channel,” and was concerned that their comments “risk being accepted by an audience that might not know the facts that well.” Explaining that several medical sources find some good in using horseback riding to treat problems with walking in those with MS, he reiterated that “this is a legitimate therapy”– not one he uses, he joked, “because I’m generally bigger than the horses and I don’t want to hurt them.”

“It seems odd to me a network with the very letters MS in its name wouldn’t resist making fun of someone who has to live with MS every day,” Cavuto continued, “Ann Romney doesn’t need their pity, just their accuracy.” “These guys taking pot shots at Ann Romney are horses’ asses,” he continued, also calling them “condescending, sanctimonious twits who are allegedly healthy,” and their mocking “pure, unadulterated horse… stuff.”