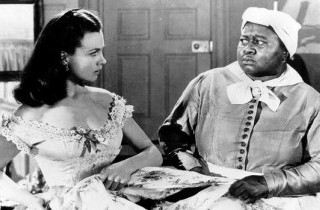 And so it begins…

Now that the Confederate flag is well on its way off into museums across every state in the south, you can bet other “ugly symbols of racism” will be taken out of plain sight as well. Next up according to one writer: Gone with the Wind.

In Wednesday’s New York Post, movie critic Lou Lumenick called for the classic 1939 movie to be sent to the dustbin as well. Gone with the Wind is only ranked the #4 movie of all-time by the American Film Institute. It has only generated the most box-office revenue of any movie in history ($1.6 billion when adjusted for inflation). It only won eight Academy Awards, including Best Picture. Forget the study-this-in-acting-class performances by Vivien Leigh, Clark Gable and Hattie McDaniel, who was only the first African-American to win an Oscar. Because now that everything remotely connected to the slave era is being questioned — flags, statues, the General Lee from The Dukes of Hazzard — why not throw an iconic flick into the mix too?

Based on a best seller by die-hard Southerner Margaret Mitchell, “Gone with the Wind’’ buys heavily into the idea that the Civil War was a noble lost cause and casts Yankees and Yankee sympathizers as the villains, both during the war and during Reconstruction…

[W]hat does it say about us as a nation if we continue to embrace a movie that, in the final analysis, stands for many of the same things as the Confederate flag that flutters so dramatically over the dead and wounded soldiers at the Atlanta train station just before the “GWTW’’ intermission?

So blacks in the U.S. must be really offended by the movie, right? Except they’re not, as 61 percent call Gone with the Wind one of the best movies of all time (YouGov.com poll), while 56 percent of whites in the same poll feel the same way. Overall 73 percent of surveyed black Americans call it either “one of the best” or “very good/good.” That number jumps to 87 percent when including the category of “fair”.

Lumerick didn’t bother mentioning this, of course… and thinks the movie should be relegated to museum-viewings only, concluding:

It’s showing on July 4 at the Museum of Modern Art as part of the museum’s salute to the 100th anniversary of Technicolor — and maybe that’s where this much-loved but undeniably racist artifact really belongs.

What movie will be banned from all public viewings outside of museums next? How about Mel Brooks‘s Blazing Saddles? How about Seinfeld simply for not featuring any major black cast members despite being set in New York? And if you think half the jokes in Caddyshack would fly today, particularly the one about the best person to buy pot from, think again. And if you think these examples are extreme and would never be discussed, check out this exchange between CNN’s Ashley Banfield and Don Lemon on the Jefferson Memorial:

“There is a monument to him [Thomas Jefferson] in the capital city of the United States. No one ever asks for that to come down,” Banfield said. Lemon responded that Jefferson represented “…the entire United States, not just the South,” adding, “There may come a day when we want to rethink Jefferson. I don’t know if we should do that.”

Want to debate the Confederate flag and think hiding it away will somehow solve the laundry list of problems facing many African-Americans today? Knock yourself out. It’s our maybe-it’ll-make-us-feel-better-about-ourselves reaction to a horrific act carried out by a insane, racist kid no different (in terms of evil) than Adam Lanza in Newtown or James Holmes in Aurora.

And when the flag is defeated — and it will be given the swift reactions from the state of Alabama to Walmart to Sears — we’ll move on to the next ugly symbol of hate plaguing us: Gone with the Wind.

Frankly my dear, you should give a damn.