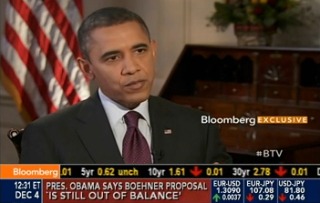 President Obama appeared on Bloomberg TV Tuesday afternoon for his first interview since winning re-election to discuss the impending fiscal cliff, and gave his opinion that Speaker John Boehner‘s financial plan is still lacking in basic arithmetic: “It’s not me being stubborn, it’s not me being partisan, it’s just a matter of math.”

Sitting down with reporter Julianna Goldman, Obama was asked several questions about his handling of the looming fiscal cliff, including when he would put forth a new proposal after his rejection of Speaker Boehner’s plan yesterday. Instead of directly answering, he maneuvered around the question, saying, “Speaker Boehner and I speak frequently.” When pressed, he responded, “I don’t think that the issue right now has to do with sitting in a room.”

Obama continued on the same hardline he’s taken since the beginning of the fiscal cliff negotiations, telling Goldman, “We’re going to have to see the rates on the top two percent go up. We’re not going to be able to get a deal without it.” The president also said that he’s still confident a compromise can be reached, but that he didn’t believe a comprehensive reform of the tax code or entitlement programs would be possible by the deadline.

He also later tackled circling rumors that he would announce Hillary Clinton‘s successor this week, saying “I haven’t made a decision on Secretary of State.”

Watch the full clip below, via Bloomberg: