Paula Deen Addresses Racism Controversy In Tear-Filled Today Interview: I Would Not Have Fired Me
video

Paula Deen Addresses Racism Controversy In Tear-Filled Today Interview: I Would Not Have Fired Me 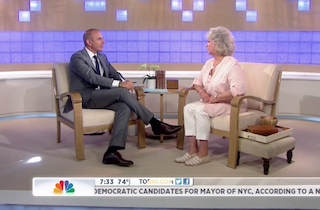 Amid controversy over her admission of using racial slurs in the past, Paula Deen appeared on Today on Wednesday, sitting down with Matt Lauer for a tear-filled interview. Addressing the “hurtful lies” that have been said about her, a “heartbroken” Deen emphasized her belief that everyone be treated equally —thankful for those who have stood by her side.

Addressing last week’s interview with Lauer that she failed to show up for, Deen recalled that she was in a “state of shock” and overwhelmed. “There’s been some very, very hurtful lies said about me,” Deen told him, wishing to put forth her beliefs. “I believe that every creature on this earth…was created equal. … I believe that everyone should be treated equal.”

Lauer remained blunt, questioning whether Deen was there in an attempt to stop the “financial bleeding,” but Deen insisted that wasn’t the case. That she wanted people to “know who I am.” People she’s never heard of are saying things about her, she said — and their words are being given weight.

“Would you have fired you?” Lauer asked, seeking to steer the interview as Deen rambled and went on tangents. Deen replied, “Knowing me, no.”

As she thanked those partners who have been by her side, Lauer asked, point blank, “Are you a racist?”

“No,” Deen responded, pointing to the way she was raised by her father who would not have tolerated any kind of superiority complex over others. That said, Lauer pressed, she admitted to using the “n word” in the deposition. That was “a world ago,” Deen said, and during a robbery. Other than that instance, Deen said she’d never used the term because “it’s just not a part of who we are.”

“I have never with any intention hurt anybody on purpose and I never would,” Deen told Lauer. “What you see is what you get. … I’m heartbroken.”

“I is what I is and I’m not changing,” Deen said later. “There is someone evil out there that saw what I worked for, and they wanted it.”