Piers Morgan Gets Heated With Wasserman-Schultz On Libya: ‘You Are Flogging The Wrong Dead Horse!’
video

Piers Morgan Gets Heated With Wasserman-Schultz On Libya: ‘You Are Flogging The Wrong Dead Horse!’ 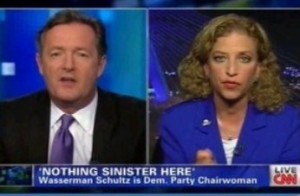 DNC Chairwoman Debbie Wasserman-Schultz appeared on CNN tonight to talk about the White House’s response to the attacks on the U.S. consulate in Libya. Piers Morgan confronted Wasserman-Schultz over the false statements made by the administration and got argumentative when she insisted that the incorrect information was not given deliberately.

Wasserman-Schultz opened by insisting that Romney has been completely “deceptive” since last week’s debate and has taken positions on economic and social issues counter to what he has been saying on the stump for months. She used the same words Romney himself used at CPAC earlier this year to call him a “severely conservative” candidate for the presidency. Wasserman-Schultz made it clear that the Democratic campaign would be focused on calling out Romney for his lies.

Morgan turned the trust issue around, bringing up the hearings conducted today over the attacks on the U.S. consulate in Benghazi last month. He said that the administration “clumsily handled” the aftermath of the attack, asking the DNC chairwoman if there was anything scandalous about the way it was conducted. Wasserman-Schultz talked at some length about Obama’s respect for the late ambassador Christopher Stevens, who was killed in the attack, and bashing the Republicans for “taking cheap political shots.”

Morgan interrupted Wasserman-Schultz to get her to highlight how much the Obama administration and State Department were playing up the controversial film Innocence of Muslims being connected to the attacks before all the facts were in. Wasserman-Schultz found it shocking that Morgan would accuse U.N. ambassador Susan Rice of being “deliberately misleading” on the nature of the attacks. Morgan followed up by asking if Rice was simply wrong. Wasserman-Schultz said that as more information came out, it became clearer that it was a terrorist attack, and U.S. officials were just going on the information they had at the time.

After Wasserman-Schultz twice tried to criticize the Republicans for politicizing the attacks, Morgan told her she was wasting time on the wrong issue entirely.

“You’re flogging the wrong dead horse! It isn’t about what Mitt Romney or Republicans did. The really… important horse that should be flogged is the behavior and the statements of those who were in positions of responsibility and, we would assume, knowledge, and it’s pretty un-American… to put out completely false statements before you know the facts, isn’t it?”

Wasserman-Schultz said that the administration delivering wrong information was not “deliberate,” insisting that there was “nothing sinister here.”