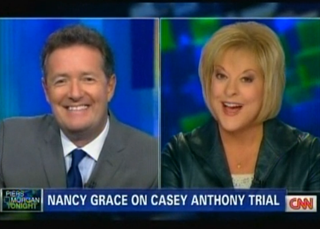 In case anyone were wondering, Nancy Grace is still angry. The fact that Casey Anthony is now a free woman seems to have lit an even brighter fire under Grace as she visited Piers Morgan tonight for an interview. Repeating that she was “let down” by the verdict, Grace took offence to Morgan suggesting she made the case “her own” and shot back at other lawyers who had spoken to Morgan and considered the verdict reasonable: “your experts are wrong.”

Morgan managed to keep the tenor of the interview fairly low for the first part of the chat, opening by asking Grace to explain how the verdict made her feel. “Knowing that Tot Mom is free leaves me… a feeling of being let down,” she said, adding that the entire ordeal was “deeply upsetting to me” as she had witnessed “a miscarriage of justice in a system that we hold so dear.”

It didn’t take long to make her angry, however, as she snapped at Morgan for what appeared to be a fairly innocuous comment: that she had had a “fantastic run” with the case and had “made it your own.” “Whoa, whoa, whoa,” she began shouting, “I didn’t make anything my own. This is Caylee’s story.” She explained the process through which she and her production crew cull through the thousands of cases going on in the nation today– going through about 70-80 a day– and confirmed that this case particularly spoke to her. “It is every parent in America’s case– as a warning.”

Morgan then shifted gears to Grace’s faith in the jury system. “90% of the legal experts I’ve had on, when I pushed them… all said there was not enough hard evidence [to convict],” Morgan noted (through a bit of resistance). Grace replied that she believed in the system but also acknowledge that humans comprised it and humans made mistakes. That said, “I would be willing to suggest that your experts are wrong.” The reason the jury could not reasonably find doubt, Grace continued, was that the core excuse for not finding her guilty was the lack of, as Morgan put it, “hard” evidence. “Under our law,” however, “circumstantial evidence is deemed equal,” as in many cases, “you don’t have eyewitnesses to a crime.” To not deem the circumstantial evidence equal to hard evidence, Grace concluded, was the equivalent of giving Anthony a “gold star” for doing a good job of disposing of the body. “Why should Tot Mom get a benefit because the child was so decomposed?”