Rachel Maddow: People Have ‘Reasonable Fear’ That Gov’t Will Use IRS To Go After Political Enemies
video

Rachel Maddow: People Have ‘Reasonable Fear’ That Gov’t Will Use IRS To Go After Political Enemies 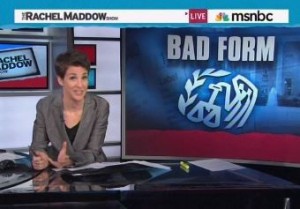 Rachel Maddow tonight covered the new big scandal out of the Obama administration. No, not that one. Or that one. The scandal at hand is the revelation that Tea Party groups were singled out for scrutiny by the Internal Revenue Service. And unlike other Obama administration scandals, this one is being taken seriously by the left because, as Maddow put it, there is a bipartisan “reasonable fear” of the IRS targeting political opponents of those in power.

After running a clip of President Obama expressing his outrage on the news, Maddow pointed out how current campaign finance law dictates that making donations to political group must be done with “social welfare organizations,” which don’t really intervene much in elections. But, Maddow pointed out, most of these groups ended up putting out campaign ads anyway.

She noted how Obama’s presidency has seen the rise of 501(c)4 groups, calling it a “joke” that such groups are not set up to be political actors. The current IRS scandal involves exactly how thee tax-collecting agency dealt with right-wing groups that requested tax-exempt status while attempting to walk the thin political line, and how they ended up singling out Tea Party groups.

Maddow made it clear that “it’s not fair” that unequal scrutiny was being applied to right-wing and left-wing groups, and pointed out how the IRS carefully and quietly changed the language it used to determine who deserved scrutiny. She said that all political groups need more scrutiny, but it just can’t be conservative groups that get subjected to that scrutiny. And the reason this scandal is getting such legs in the media, as Maddow pointed out, is that IRS targeting has been going on for a while.

Maddow brought up how the NAACP was targeted by the IRS in 2004 as another example of critics of the president being targeted.