Rachel Maddow To Fact-Checking Site PolitiFact: ‘You Are Fired’
Video

Rachel Maddow To Fact-Checking Site PolitiFact: ‘You Are Fired’ 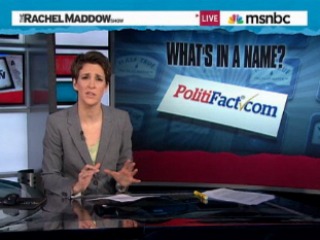 In the last 22 months, the President said, businesses have created more than three million jobs, last year creating the highest number of jobs since 2005. The folks at Maddow’s show looked into the numbers as well, finding a January 6th report from the Bureau of Labor Statistics saying that the private section has created 3.2 million jobs since February 2010. PolitiFact also checked off the statement as true. So far, so good.

RELATED: Five More Important Lies Told In 2011 Than Politifact’s Lie Of The Year

PolitiFact then did some research on the second part of Obama’s statement. “He’s right,” the site reported, “if you’re counting private-sector jobs.”

So, why, Maddow asked, did PolitiFact rate his statement as “Half True”?

“Obama is correct on both counts,” the site said, “when using private-sector job numbers. But he went too far when he implicitly credited his administration’s policies. So we rate the statement Half True.”

The thing is, Maddow pointed out, the President had specifically credited businesses for creating jobs, not his administration. And PolitiFact has since updated their post on the matter, adding that it has “concluded that [Obama] was not making that linkage as strongly as we initially believed.” Their new rating? “Mostly True.”

That a fact? Have a look, via MSNBC: