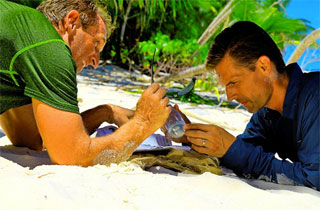 Today, Discovery announced a new miniseries in which two sitting US Senators — one a Democrat, one a Republican — get stranded on an island.

Rival Survival will drop Sen. Jeff Flake (R-AZ) and Sen. Martin Heinrich (D-NM) on a remote dot of nowhere in the Marshall Islands, where, “using only these limited resources and their wits, the pair must work together as they attempt to spear fish, build shelter and find enough water to survive for one week.”

Adding to the tension, according to Entertainment Weekly, is the fact that they’re on opposite sides of the aisle: Sen. Flake is described as “a true conservative Republican,” and once controversially voted against a gun control bill despite promising the mother of an Aurora victim that he would vote in its favor. Sen. Heinrich is pro-labor, pro-environment, and pro-Obamacare.

In a joint statement, the two senators said they wanted to do something “a little extreme” to combat the bipartisanship plaguing Washington.

“Both of us know just how frustrated people are with Washington right now,” they said. “We can both attest that no one is more frustrated than those of us trying to get things done in this environment. We recognize how difficult it can be to cut through the partisanship. So we decided to do something completely out of the ordinary and frankly a little extreme to show the world and our colleagues that even if you have serious differences, if you want to survive you have to work together.”

Surprisingly, Sen. Flake has years of remote island experience: He’s traveled to uninhabited islands in the South Pacific to hone his survivalist skills, and once took his teenage sons with him.

It is unclear whether Sen. Heinrich has similar experience, unless he is secretly a bloody handprint on a volleyball.