Michele Bachmann | Pakistan Is Too Nuclear To Fail
video 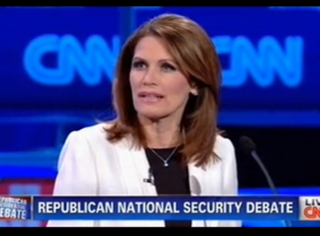 As the second foreign policy debate of the 2012 elections picked up speed, Rep. Michele Bachmann landed the first blows of the night on Rick Perry in an exchange on America’s relationship with Pakistan in which she declared the candidate’s take was “highly naive.” Perry, who had been arguing that the Obama administration was handing Pakistan “blank checks,” was not able to strongly retort to Rep. Bachmann, as she delivered the most quotable line of the night so far: “Pakistan is too nuclear to fail.”

“Pakistan has been the epicenter of dealing with terrorism,” Rep. Bachmann responded to how she believed America should deal with it. She noted that “the Chinese are doing everything to be influential” with Pakistan, which means diplomacy must be delicate so as not to push them towards working with China. That said, Rep. Bachmann had little nice to say about Pakistan, calling it “a nation that lies, that does everything you can imagine wrong” but noting that, “at the same time, they do share intelligence data with us regarding al-Qaeda,” for which America has been paying.

Perry did not buy the idea that the money given to Pakistan helped American foreign policy. “I would not send them one penny, period,” he argued, “if you are not an ally of the United States, do not expect a dime of our money to come in.” This policy was one Rep. Bachmann did not hesitate to call “highly naive,” noting that it ignored the role China was playing in the relations.