Rep. Peter King Threatens to Jump Off a Bridge if Cruz Gets GOP Nomination
VIDEO

Rep. Peter King Threatens to Jump Off a Bridge if Cruz Gets GOP Nomination 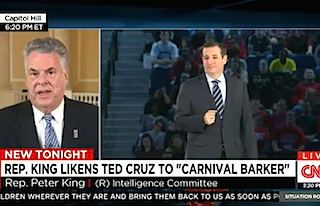 Rep. Peter King (R-NY) appeared on CNN’s The Situation Room Monday afternoon and when Wolf Blitzer asked him to explain his statement that compared Sen. Ted Cruz (R-TX) to a “carnival barker,” the Republican congressman opted not to walk back his comments but instead take about a dozen steps forward.

“We need intelligent debate in the country. Ted Cruz may be an intelligent person, but he doesn’t carry out an intelligent debate,” King said. “He oversimplifies, he exaggerates and he basically led the Republican Party over the cliff in the fall of 2013. He has shown no qualifications, no legislation being passed, doesn’t provide leadership and he has no real experience. So, to me, he is just a guy with a big mouth and no results.”

But would King support Cruz if he ended up becoming the Republican Party nominee for 2016?

“I hope that day never comes,” King told Blitzer. “I will jump off that bridge when we come to it.”

King said Cruz would have to undergo a “complete conversion” before he could imagine casting a vote for him in a general election. He described himself as a “true conservative” unlike “counterfeit” candidates like Cruz and Rand Paul and said he might just have to run himself to prevent them from “hijacking the nomination.”

The congressman named Jeb Bush, Scott Walker and John Kasich as GOP candidates he could see himself supporting, but added he just doesn’t see Cruz and Paul as being “part of the talent pool.”