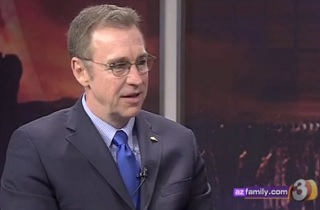 If you’re as unimpressed as I am with Senator Rob Portman (R-OH) late-to-the-party, two-years-in-the-making, only-because-his-son-is-gay “support” for gay marriage, have I got a Republican with a gay son for you. While Portman is breaking his own arm patting himself on the back for finally recognizing that LGBT people are full human beings, Rep. Matt Salmon (R-AZ) is busy telling his gay son to take his marriage equality and shove it, but Salmon, at least, seems to recognize that his position, and his party’s, is the last lizard-brained vestige of soon-to-be-extinct social Neanderthals.

Sen. Rob Portman’s slow-motion jump onto the gay marriage bandwagon has been largely greeted with prodigal son enthusiasm by the media, and provided Republicans with a handy ambassador to the 21st century, but everything about it just bugs me. When Portman came out about his son’s coming out, after years of voting against gay rights, he revealed that his son, Will, had come out to him two years earlier, that it apparently took him those two years to become “comfortable” with his decision, and that there’s no way Mitt Romney* passed him up for VP because of his son, and he knows that “because they told me.”

Yeah, your party has an anti-gay marriage constitutional amendment in its platform, and just released an autopsy report subtitled “GOP to Gay: Drop Dead,” but your gay son had nothing to do with them dropping your veep candidacy like a bad date to the Gay Prom. The only admirable thing about Rob Portman’s conversion is the skill required to swallow that whopper.

He also made sure to tell CNN that gay marriage is “consistent with” the conservative principles he’s always espoused, which, by extension, means that for all the years prior to his conversion, he was a lousy conservative who hated families, just like every other elected Republican (except two) still is. So deep is this change of heart that he told CNN he’s “probably not” going to push other Republicans to recognize his son’s humanity.

Rob Portman’s pride at finally tolerating your son’s existence stands in stark contrast to Rep. Matt Salmon’s (perhaps inadvertent) honesty about his own position. In an interview with Arizona’s 3TV, Salmon revealed that although he has a gay son, he still opposes marriage equality. “My son is by far one of the most important people in my life. I love him more than I can say,” Salmon said, adding that “I’m just not there, as far as believing in my heart that we should change 2,000 years of social policy in favor of a redefinition of the family.”

If you think it’s odd for Salmon to cite the entire past 2,000 years of “social policy,” given that he’s a Mormon, or that it takes a cold piece of business to tell his own son to eat it, you’re not wrong. What makes Salmon’s position interesting is that he seems to understand that he’s being regressive. He goes on to say “It doesn’t mean that I don’t have respect; it doesn’t mean that I don’t sympathize with some of the issues. It just means that I haven’t evolved to that station.”

Emphasis mine. This is actually a rare bifecta of Republican admissions; first, that opposing marriage equality is an unevolved position, and almost as remarkably, that evolution exists.

There are already plenty of people who believe in marriage equality because, like Quaker Oats, it’s the right thing to do. I much prefer the honest bigotry of Rep. Salmon to the self-congratulatory cowardice of a Rob Portman. I would also prefer it if Democrats were more honest about their conversions, and just came out and said that they’ve always believed in marriage equality, but were too afraid of people like Salmon and Rob Portman From Early January getting them voted out of office where they could do no good for gay people, but that’s another story.