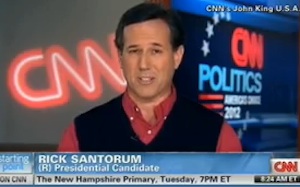 Appearing on John King USA on Wednesday evening, Rick Santorum denied he said he didn’t want to make “black people’s lives better” during a pre-caucus campaign event Sunday in Sioux City, Iowa. “I’ve looked at that quote, in fact I looked at the video,” Santorum argued. “In fact, I’m pretty confident I didn’t say black. What I think — I started to say a word and then sort of changed and it sort of — blah — mumbled it and sort of changed my thought.”

Mediaite’s Tommy Christopher noted it took Santorum three days to clarify that he really said “blah” not “black”. He emailed Santorum’s campaign on Monday, Tuesday, and Wednesday before he volunteered this unusual explanation.

Honestly, on first listen, I heard “blind people”, Nando Di Fino heard a rushed “blighted people” and Christopher had interpreted his quote to be “I don’t want to make…mmbligh…people’s lives better.” Santorum himself noted that “no one in that audience… no reporter there, heard me say that.”

Vote on what you heard Santorum say, and then watch his appearance with John King below: