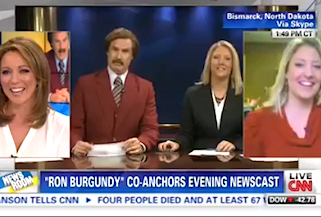 The lucky local anchor who got to sit next to Will Ferrell’s Ron Burgundy for a full 30 minutes Saturday night when the Anchorman character took over Bismarck, North Dakota’s KXMB newscast sat down with CNN’s Brooke Baldwin Monday to discuss the surreal experience.

Amber Schatz told Baldwin that she originally thought the whole thing was going to be a prank but once Ferrell showed up in character and started improvising in the character’s voice, she “couldn’t get over hearing that in person and that this was actually happening.”

“Luckily, it’s just kind of a lighter, softer news time of year right now,” Schatz explained. “It’s the holidays and there was nothing breaking or hard news, thank goodness, because that would have been extra difficult to deal with.” She said she was surprised that “stuff was funny that I didn’t even think would be funny because he’s hilarious.”

Schatz, who said she was in college when the first Anchorman movie came out, added that the experience “exceeded my expectations, and I had very high expectations, because I’m a huge fan of Ron Burgundy, and Will Ferrell.”

Baldwin also brought in CNN’s marketing contributor Peter Shankman who praised the stunt, saying of the team behind it, “They knew, the second someone sitting in North Dakota watches–‘What did I just see?’–They’re going to grab it, post it, and it’s going to take on a life of its own. They’re talking millions upon millions of millions of publicity.”

“You are the envy of many an anchor around the world,” Baldwin told Schatz before the segment ended. “You did a phenomenal job. I don’t know how you held it all together as you did.”