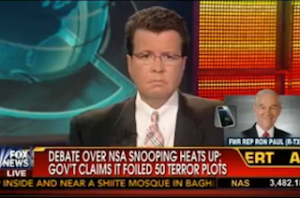 At the top of his afternoon Fox show Tuesday, Neil Cavuto invited former congressman Ron Paul (R-TX) to share his thoughts on the House hearing held earlier today with leaders from the NSA and FBI on the United States’ controversial surveillance programs. Paul was not impressed with the “sham” proceedings and castigated his former colleagues for failing to ask the right questions about how our country can prevent terrorist attacks.

Paul told Cavuto he doesn’t “really believe” that NSA surveillance prevented over 50 attacks, as the officials have claimed, accusing them of “fudging the figures.” He said “the hearings today were a bit of a sham hearing because they had already decided what the results would be” and added that the NSA has to “try to justify their existence of destroying the freedom and privacy of the American citizen, otherwise they’re out of work.”

“It’s sort of like the old story of you have to burn the village to save the village,” Paul continued. “They want to burn the Constitution to save the Constitution.” He appeared to put equal blame on Congress for passing the Patriot Act as he did on the Obama administration for continuing the surveillance programs started under President Bush. “If we can go to war and do all these other things and throw the Constitution out the window so casually,” he said, “you better be sure, if you give them an inch, they’ll take a mile and they’re always going to paint themselves as heroes.”

“The one thing they don’t do,” Paul said, perhaps referring to both Congress and the agencies in charge of keeping America safe, “is ever ask the motivation for people wanting to kill us.” He didn’t deny the “danger” of “another 9/11,” but he argued rather than “taking more liberties away from the American people,” we should be asking why terrorists are “willing to commit suicide and kill us.”

Paul concluded, “if you never ask the question, what motivates these people to do this, you’re not likely to stop them.”