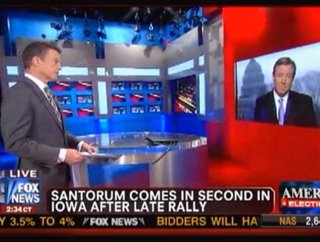 By almost all measures starting sometime last year, Rick Santorum outdid himself in Iowa last night coming in at a very close (eight votes!) second place to Mitt Romney. But as his star rises, so do the concerns of those that remember statements he made when he was a longshot for the position or not even running. On today’s Studio B, Shepard Smith brought up one of Santorum’s most controversial comments, asking Republican commentator Terry Holt whether even social conservatives would not accept Santorum’s claim that “gay love [is] similar to bestiality.”

RELATED: Shep Smith Flips Out On Legal Guests Over Baby Lisa: ‘You’re Both Full Of It!’

Holt was discussing Santorum’s campaign in general with Smith, commenting that his retail politics in Iowa “reminded me of the old Rick Santorum” and that he “got his [surge] at exactly the right time, and if he does well in New Hampshire I see this, it’s possible, but it’s the money and it’s the time.” Smith agreed except for his reservation that Santorum’s extreme views would not go over well with many voters. “It’s going to be talked about eventually that Rick Santorum is, among other things, a man that equated homosexual sex to bestiality,” Smith remarked, adding that “his list of things that are not going to appeal to any moderate is long.”

Holt agreed but considered that, compared to other candidates, Santorum didn’t have as big of a problem, to which Smith countered, “I don’t think all social conservatives consider gay love similar to bestiality.” “That’s true,” Holt replied, but added that “these candidates have had their share of gaffes” and that Santorum “he has more of a story to tell than just a few odd statements.”