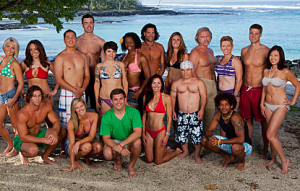 Welcome to Episode 2 of Survivor: One World! Just an FYI to all of my readers, starting tonight I will be choosing my Top 3 players of the episode … Yes, I know – three players may be a stretch – but whether it’s as simple as “I like their island hair this week” .. gosh darnit, I’ll find something!

First of all, sometimes it pains me at the beginning of the episode when they do a brief synopsis from the week before – especially when I have to listen to Matt stroke his own ego ALL over again. What a bore.

This episode starts off with the women returning from their first tribal council. Michael claims that he tended the fire while the girls were gone for “hours.” You may think that he’s being dramatic by saying they are gone that long, but I can assure you, it’s the truth. I will never forget my very first tribal council experience — as I’m sure none of you die-hard Survivor fans will either — but just in case you aren’t sure of what I’m referring to… two words: Phillip Shepard. I was sitting at tribal on the world’s most uncomfortable stool for a solid 3+ hours, so I know that those nights have the potential to be BRUTAL. Michael also says he is “annoyed” that none of girls had to get voted out. News flash: a girl still went home, so you’re one person closer to the million. So far, you have nothing to complain about.

Alicia and Christina discuss the altercation that took place at tribal and appear to make up … but of course, behind the scenes, Alicia is loving what went down and goes on to say, “if Christina were drowning in the ocean I wouldn’t save her.” Wow Alicia, really? … I hope your students, or, better yet, their parents, aren’t watching.

(I secretly hope they are).

The next morning, the girls decide to come together and set some “ground rules.” First order of business – appointing a leader, in which case the consensus seems to be Sabrina. She immediately says what all of us are thinking: “managing the airheads is gonna be exhausting.” (Sabrina, have I told you lately that I love you?)

The tribes receive tree mail, which consists of an enormous box and an envelope of instructions. This is a “Do It Yourself” reward challenge in which both teams must untie a series of knots and separate a ring from the rope. What are they playing for, you ask? The most important thing (aside from fire): a TARP! On Redemption Island, we won a tarp and it came in SO handy on all of those rainy nights. Both tribes seem to have had the same strategy to untie the knots, and the men win by mere seconds, leaving the women feeling extremely let down once again. The men return to camp victorious – not only do they get the tarp, but the rope as well. They claim to now have the “best camp in history” .. but I beg to differ. Our camp on the Ometepe beach was immaculate and complete with a waterfall, swing, rockin’ shelter, not to mention the blankets, pillows, lounge chairs, and tarp we won when Zapatera threw the challenge. Smart move.

It’s no secret that Colton doesn’t relate well to the guys on his tribe, but he certainly isn’t helping his cause. I LOVED him week one, but this week he semi-annoyed me. He doesn’t help around camp (so they say) and is definitely shmoozing with the girls as much as possible. Not the smartest strategy I’ve ever seen – he may be thinking he has no chance so why try , but remember Cochran from last season? He also struggled to fit in socially, but still did as much as he could!

It seems that even the women are starting to get frustrated with him. Sabrina pretty much sums it up by saying, “Colton is like a virus.” He reveals that he doesn’t seem to fit in with the men or the women and names his own tribe, “The Colton Tribe.”

In an effort to get some leverage, Colton shows Troyzan and Jonas his hidden immunity idol. The three of them immediately make plans to get rid of the “muscle.” Any guess as to who that would be? I’m sure you got at least one of them right…Mike and Matt (Just FYI, I support this movement). Somehow, just when all seemed lost, Colton is now the “ringleader” of a group he calls the “misfits” until he can align with the women.

First of all, I love seeing Jeff at these challenges. I just think he’s the cutest … it must be the dimples! The challenge consisted of a balance beam suspended above the water, lined with all tribe members on their respective beams. One player at a time must go around another player without falling or touching two people at once. Pretty straightforward challenge, that I initially thought the women would be great at. I could not have been more wrong. The men looked like they’ve been doing this all their lives, and the women could not get it together whatsoever. Even Jeff looked frustrated. Trust me, Jeff, we feel your pain. Once again, the men win immunity. Men-2, Women-0.

The girls return to camp after another disappointing loss and immediately, Kat takes the blame for losing the challenge (which she should). Nina calls Kat a “dumb blonde” and approaches Chelsea about voting her out. Chelsea takes the information to Kim and while they agree with Nina, they keep talking about “numbers, numbers, numbers.” Guess what ladies, you won’t have the “numbers” that you speak about of if you don’t start winning challenges – so vote off the people who can’t perform!

At tribal…Jeff seems frustrated yet again, stating, “its like I’m talking to a bunch of sixth graders.” Nina starts right in explaining why she is an asset to her tribe, speaking of her 13-year career as an LA cop, and proceeds to call out Kat, asking her what she can bring to the table. I’m LOVING Nina this episode – she is really fighting for her spot in the game. Kat, on the other hand, shows absolutely no fight whatsoever and continues to say, “its my fault we lost the challenge.” In the end, however, it’s Nina who gets her torch snuffed and I am actually sad to see her go. These women better get it together! I can only hope that next episode they surprise me and show some toughness and grit!

Top Players of the Episode:

1. Sabrina – She didn’t shy away from the leadership role. She accepted it and took it seriously…another reason why she’s one of my favorites to win the WHOLE thing!

2. Monica – Monica really stepped up in the challenge for the women, and in spite of their pathetic performance, she managed to take charge and show that she can be a strong asset for them.

3. Colton – I liked that he made a move, forging a little plan with Troyzan and Jonas and using his idol to pull some weight! Don’t let me down, Colton!

Thanks for joining me again this week!! I hope you enjoyed reading … Make sure to follow me on twitter as well at @AshleyUSurvivor!!