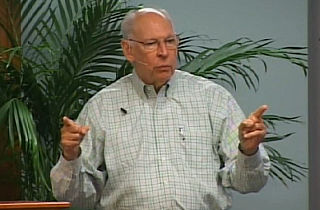 Another video has emerged of Sen. Ted Cruz‘s father Rafael making incendiary remarks about politically sensitive topics. Last week it was the suggestion that Obama should “go back to Kenya“; this week it’s that homosexuality and evolutionary biology are Marxist tools to undermine the traditional family and “destroy” God.

Of course, the first question is: Why should anyone care?

Before we answer that, here’s exactly what the elder Cruz said [emphasis added]:

“Communism or socialism, whatever you want to call it, what is happening in this country is not different than what happened in Cuba […] It is about government control of your lives. You got to realize how Marxism, how socialism works […] When you hear all these things about homosexual marriage, this has nothing to do with homosexual rights. Did you know that? The whole objective is the destruction of the traditional family! It has nothing to do with homosexuals. They could care less about homosexuals, they want to destroy the family.

You need to understand, it’s just like evolution. I’ve met so many Christians that tell me, ‘Well, evolution is a scientific fact.’ Baloney! I am a scientist, there is nothing scientific about evolution. But you know something? Karl Marx said it: ‘I can use the teachings of Darwin to promote communism.’ Why? Because communism — or call it socialism if you think communism is too hard a word — necessitates for government to be your god and for government to be your god they need to destroy the concept of God.”

That’s why communism and evolution go hand-in-hand. Evolution is one of the strongest tools of Marxism because if they can convince you that you came from a monkey, it’s much easier to convince you that God does not exist.“

Now, as for why anyone should care what Ted Cruz’s pastor father says: Well, it’s a mixed bag.

No one wants to be held liable for the kooky political beliefs of their parents. Imagine being branded for life based on the chain emails your crazy uncle forwards you every day. It’s unfair to suggest that the younger Cruz is a birther wacko simply because his father is a birther wacko.

However… something about the elder Cruz’s remarks do present an interesting challenge for the Republican Party. His comments represent an incredibly vocal portion of the GOP voting base and, in particular, the opinions of the supposedly “influential” Iowans who make GOP primary candidates sign bizarro anti-porn, anti-gay pledges.

2016 will be interesting because even as public opinion shifts away from archaic, narrow-minded views about homosexuality, we will most assuredly see a strong evangelical presence hovering over the primaries. It will be interesting to see if any candidates finally have the guts to openly shrug off that sect of primary voters while effectively touting the truly limited government stance.