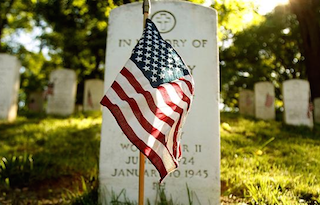 Memorial Day weekend is upon us, which means America’s television networks are pulling out all the stops when it comes to specials and marathons. There may not be a new episode of Game of Thrones this Sunday night, but there is a ton of other great stuff to check out. So if you would rather stay inside than venture out into the world this weekend, here are your best bets for Saturday, Sunday and Monday.

TCM: Military movie marathon (“The Dawn Patrol,” “The Red Badge of Courage,” “Sergeant York,” “Friendly Persuasion,” “The White Cliffs of Dover,” “The Young Lions,” “The Fighting Sullivans,” “Twelve O’Clock High,” “The Best Years of Our Lives,” “Pride of the marines”) 4 a.m. to 4 a.m. the next day

For more, see the full list of specials and marathons, compiled by zap2it.

[Photo via The History Channel]