The Newsroom Recap: Maggie And Gary Cooper Go To Africa 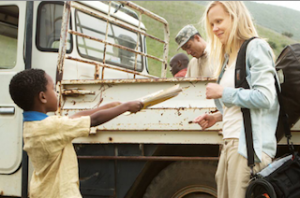 The Newsroom shot back to the present Sunday night with the return of Marcia Gay Harden’s hardened First Amendment lawyer Rebecca Halliday, who has turned her attention to definitely spiky-haired, possibly “messed-up” Maggie. This is the episode where we finally find out what exactly happened to Maggie when she went to Uganda that has caused her to be such an unreliable witness in the Operation Genoa affair. Was she sexually-assaulted like CBS’ Lara Logan as many had predicted? Or possibly kidnapped and tortured by terrorists?

It turns out it was something simpler and less direct, though no doubt very terrifying. Through her testimony to Rebecca, who’s just trying to see of Maggie “laughs anymore,” we find out that Maggie and her good friend Gary Cooper (to everyone’s hilarious surprise, not the long-dead film actor of such classic Westerns as High Noon) found themselves in an ambush by “cattle raiders” at a Ugandan orphanage long before their real reporting even began.

When Gary first walks into the orphanage with his video camera, the children scream, thinking it’s a gun. Maggie takes under her blond-headed wing one little boy named Daniel who seems particularly traumatized. Later, when the cattle raiders arrive, she and Gary heroically pull the terrified Daniel from beneath a bunk bed and rush him onto the bus with the other children. But seconds before they make it on the bus, Daniel is shot in the spine and killed while riding on Maggie’s back. As she later tells Rebecca, the gunmen weren’t looking for cattle, they were shouting “give us the camera.”

Maggie’s white guilt played perfectly into the big, real news story playing out in early October, 2011, when the rest of the episode takes place. The story breaks about the “Niggerhead” rock on Rick Perry’s ranch and the ACN team has just as much trouble dealing with the issue as everyone else on TV. This time, all Aaron Sorkin’s hindsight has allowed him to accomplish is letting the white Elliot say the word on air while the rest of the real (white) cable news anchors, including Rachel Maddow, went with the clumsier “N-word ranch.” Of course, that list does not include CNN’s Don Lemon, who was allowed to say the word in the context of reporting, inadvertently foreshadowing his infamous “N-word” special and subsequent race-based “controversy.” Meanwhile, Will decides the whole story is beneath him and just refuses to cover it. So, by having Don endorse Elliot’s use of the word, is Sorkin saying more anchors should have stepped up and said the word on television? And doesn’t he get to have it both ways by having Will ignore it completely?

The other two story lines of note in last night episode concerned Jim’s short-lived adventures in New Hampshire and the rise and fall of Neal’s Occupy Wall Street friend Shelly.

In New Hampshire, Jim Harper and his merry band of independent “freedom riders” are forced to share the one remaining room in the Concord Radisson after getting booted from the bus. It turns out Hallie’s boss is a major asshole, so Jim lands her a 30 minute one-on-one with Romney by getting the campaign spokesperson to say “go fuck yourself” is the official statement of the campaign on the Niggerhead story. Mac is pissed that he “gave away” the interview to “a girl he likes.” And Hallie is even more pissed when she finds out what he did. But that doesn’t stop her from making out with Jim when she finds out he’s going back to New York.

And Shelly “I’m not a leader” Wexler gets her shot with Will and News Night and blows it. Will declares, “I am the 1%” on air and asks Shelly, “Which system would you replace capitalism with?” Pushing her to define the goals and next steps of the OWS movement, Will completely humiliates Shelly. Will she ever be able to show her face in Zuccotti Park again? On her way out, Neal informed her that she “tanked” and she proceeds to punch him in the gut.

But since Shelly has a coincidental inside track on the dead-ended Operation Genoa investigation, the team still needs her. Will shows up at Shelly’s classroom, with no intention of apologizing for his “smug” behavior, but does come up with this token: “You were a handy prop, and I’m sorry I embarrassed you.” Also, they already found the OWS guy with the Genoa info so I guess Will is just showing us how down-to-earth and cool he is?