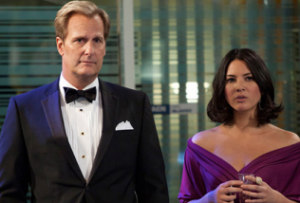 Trick question — it can be both! This week Will McAvoy is on “a mission to civilize,” which so far includes taking on Rush Limbaugh for lying about Obama’s record on gun control, and telling several women that they are stupid bitches because they like reality television. Let’s dive in, shall we?

It’s New Year’s Eve 2010, and everyone’s at the office in their formalwear, the first of many things that don’t make sense in this episode. Dev the blogger is attempting to convince everyone that Bigfoot is real. This comes up more times than is reasonable or necessary in the episode, turning the joke into the 2012 version ofBig Block of Bigfoot Day, which only serves to remind me of how much I miss The West Wing.

Don meets up with Maggie and tells her he has a great idea: they should set Maggie’s roommate Lisa up with Jim (who, by the way, couldn’t be bothered to get dressed up and is working through the party; couldn’t he have done that from home?). Maggie hates this idea because she is actually in love with Jim and also her roommate Lisa works at a boutique, like, what would they even talk about??? Meanwhile, Will is urged by Sloan to hit on a well-turned-out older woman at the party, who turns out to be a reporter for TMI magazine (ostensibly a marriage of TMZ and The Hollywood Reporter). Will can’t resist telling her that gossip reporting is worse than dealing heroin (!!!!) and gets a drink in his face for his trouble.

Naturally, this story ends up in Page 6, although it’s tweaked to suggest that Will got a drink thrown in his face because he was coming on to the reporter. I suppose this is supposed to demonstrate how petty and unethical gossip reporters can be, but at least they’re interesting. “News Night”‘s latest venture is “Stories We Missed Or Didn’t Pay Enough Attention To In 2010,” or “Zzzzzz” for short. One of these stories is about Obama’s record on gun control: it’s a popular conservative talking point to say that he’s conspiring to take everyone’s guns, but his record on gun control is actually pretty abysmal. This might also be because everyone stopped talking about gun control in the 90s.

We get to see Maggie and Lisa’s PALATIAL apartment while Maggie watches Lisa get ready for her date with Jim. Lisa is nervous that Jim is going to think that she’s dumb, because only people who work for cable news shows can be smart. Certainly not people who work in boutiques. Maggie reassures Lisa that Jim will think she is smart, even though she is the one who initially suggested he wouldn’t. Will is also on a date that same evening, with a friend of Sloan’s who likes expensive macaroni and cheese, weed, and guns! She carries a handgun in her purse, a gun that Will ends up pointing in her face, turned sideways gangster-style, to make a point about how women who carry guns because they’re afraid of being raped will probably get raped and shot for their trouble. How is he still single?

Will doesn’t want to date Sloan’s friend anymore after that, but Sloan asks him to keep seeing her out of politeness because she’s totally nuts and won’t stop calling Sloan if he doesn’t. Will ignores her and goes out with another woman, whom he calls a “bitch” because she follows reality TV news, which he says is making the human race “mean.” I guess Will’s pervasive, pointed meanness was just grown organically, since he doesn’t watch reality television.

Maggie asks Jim how his date went and he tells her he probably won’t be seeing Lisa again. She tells this to Don, who says that Lisa told him they were going out again that night. There’s some cellphone-related subterfuge that Don uses to bust Jim and Lisa together, and Maggie is fuuuurious. Luckily, the staff is being called in on a Saturday so she can be the maximum amount of inappropriate about it! While the junior staffers are trapped in a conference room watching Dev’s PowerPoint presentation about Bigfoot, Mac, Charlie and Will are discussing Will’s latest TMI cover.

Will can’t figure out why he’s being targeted in this way, but Charlie can — this is Leona Lansing at work, creating “context” for Will’s firing. Charlie didn’t want to tell him about his meeting with her because he was afraid that the old, cautious Will would come back. We find out that the non-compete in his contract was added in when he renegotiated it to have the ability to fire Mac at the end of every week, which is so stupid and petty that he definitely deserves what he gets. Maggie is unconscionably rude to Jim about sleeping with her roommate (she fumes that she’s not mad he slept with her, just that he lied about it) and he assigns her to the news desk for the rest of the day, where she learns that an Arizona congresswoman has been shot in the head at a meet and greet event in Tucson. It’s January 8, 2011, and the “News Night” crew swings into action to get the story.

It’s here that, after being deeply offensive for three quarters of an hour, The Newsroom gets me back for a few minutes, because the montage of the staff putting together their broadcast at the last minute, and the nature of the event itself, are very affecting. I don’t even mind when the ratings guy and Don get into a fight about pronouncing Giffords dead, even after all the other major outlets do it, because “a doctor pronounces her dead, not the news.” Their hesitancy obviously pays off, as they do the only accurate reporting that day, and then they ruin the moment again by vigorously congratulating themselves: Will screams that Don is a real newsman and no one should ever let him say otherwise, Charlie screams that Will has “feet of steel,” whatever that means, and Will screams that he wants to hear Dev’s Bigfoot theory. Meanwhile, Mackenzie screams that she “f*cked everything up” and she’s sorry, because god forbid women ever stop talking about boys on this show for three seconds. Will also reuses President Bartlet’s line that it’s going to take “more than a couple of guys” to pry him off of the television, so I suppose we can look forward to more ranting about reality television (and, no doubt, the stupidity of women). He’s on a mission to civilize!