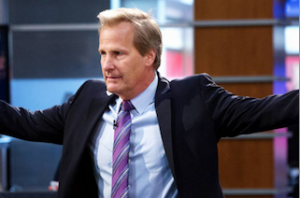 Despite everything that happened on last night’s second season finale of The Newsroom, Aaron Sorkin’s drama about the world of cable news is still scheduled to return for a third season next year on HBO. But if this episode wasn’t intended to a possible series finale, I would be shocked. Sorkin wrapped up the loose ends so neatly in “Election Night Part 2” that he made the audience realize we’d been watching a Shakespearean comedy all along, where everyone gets married in the end and everything works out perfectly, without a cliffhanger in sight.

After last week’s penultimate episode ended with Will McAvoy gearing up to get “taken apart” during ACN’s live Election Night coverage, we had to expect some on-air fireworks in last night’s season finale. But while we did get one fiery McAvoy rant about the state of the Republican Party, as often happens on this show, most of the action took place off-camera. Curiously, we do not pick up right where we left off, with Will ready to do battle with Taylor behind the News Night desk, but rather the action has shifted to Don’s office, where the senior staff is debating what to do with the David Petraeus story they’ve been fortuitously handed three days before it eventually broke.

Don wants to break the story badly in order to regain some of the station’s squandered credibility, and they appear to have the reliable, identifiable sources to do it. But that means they would have to hold the traded story, about a hypocritical congressional candidate who has more in common with Todd Akin than he has let on, and the team quickly agrees that that story has bigger Election Night implications than Petraeus. As Charlie puts it, “We’ll report that Petraeus is resigning when Petraeus resigns.” They had the chance to air a story on Election Night that would have shocked millions, but instead took the high road and went with one that would only affect a few thousand, a move that Charlie believes says a lot more about their credibility.

Up in the corporate party room, Leona and Rebecca are drinking champagne and giggling about how much they love Twitter. Leona also lets it slip to Charlie just how stoned she is. Perhaps that’s why she’s decided to let her son Reese, who previously said he wants Charlie and Will to go, make the final decision on what happens to the Genoa team. Charlie claims to be “relieved,” but on his way back downstairs he crashes head-on into Lisa (remember her?), who’s working as a lowly waitress at the viewing party.

Once he finds out Reese holds his fate in his hands, Will walks off the set so the audience can get used to Elliot calling big news, in this case that the GOP has held onto the House. Mac follows, leaving Don in charge. Mac joins Will in the dressing room to watch the news instead of making it. Will reveals that the ring that was meant to prove his love for Mac in season one was a “practical joke” and, in fact, he returned it to the store later than day. Despite her threats to hit Will in the face, Mac looks more relaxed than she has all season. Freed from the burden of doing the work, she no longer has to tiptoe around Will.

Jim’s Michigan mess-up is coming back to haunt him, the race is getting closer. He ends up advising the candidate’s campaign manager to let him make a victory speech. But that’s not the biggest thing on his plate. He feels the need to make things right with Lisa, as if he doesn’t have enough to juggle with Hallie and Maggie. Apparently, he hasn’t learned that everyone liking him is not the most important thing in the world. But really all he wants to know is if Maggie cut her own hair, a suspicion that Lisa confirms.

Later, Jim confronts Maggie point blank on the hair thing. She says her hair reminded her of the Ugandan boy who died. “There’s a difference between being tough and wanting to be,” she tells him. We flashback to Jim’s pratfall entrance, and the time Maggie first noticed him. “He’s dead and I’m alive,” she says to Jim.

After Will calls the presidential race for Obama and before the happy ending that has become more and more inevitable as the episode progresses, we get one last speech that almost rivals the American exceptionalism rant from the first episode of the series (brilliantly parodied by Funny or Die last week), the kind of speech that really gave the show so much promise from the beginning, to do for cable news what The West Wing did for presidential politcs.

With nothing left to lose Taylor asked Will if he only calls himself a Republican so he can retain the credibility to criticize the right. He answers her, on air:

“No, I call myself a Republican because I am one. I believe in market solutions and I believe in common sense realities and necessity to defend itself against a dangerous world. The problem is now I have to be homophobic. I have to count the number of times people go to church. I have to deny facts and think scientific research is a long con. I have to think poor people are getting a sweet ride. And I have to have such a stunning inferiority complex that I fear education and intellect in the 21st Century. Most of all, the biggest new requirement-–the only requirement-–is that I have to hate Democrats.”

After this, the good news starts flowing in waves.

Sloan discovers a Sweet Smell of Success poster in Don’s office, meaning it was him who bid on her book. She grab him in the control room and plants the kiss he’s been waiting for all this time.

Charlie decides that neither he nor Will should resign, especially after the bang-up job they did on Election Night. “Are we out of our fucking minds?” he asks. But it doesn’t matter because Reese has decided that ACN handled Genoa as well as they could have and won’t accept the resignations, which no one is offering anymore.

Will says he can’t let Mac take the fall before stopping in his tracks, realizing exactly how to fix everything. He unlocks his desk drawer, pulls out the Tiffany’s ring, and goes running down the hall to find Mac in full rom-com desperation. He has two very important things to tell her: “I’m in love with you” and “Will you marry me?” It doesn’t take nearly as much convincing as he had feared before she says “yes,” followed by, “Took you long enough.”

Will announces his engagement to the full staff, who clap, hug, pop champagne and smoke cigars as Pete Townsend’s “Let My Love Open the Door” blares on the soundtrack. We’ve come a long way from “You Better You Bet.”

The only way the Shakespearan comedy could be more complete is if Charlie officiated Will and Mac’s wedding right there in the newsroom. Don has Sloan, Jim has Hallie (over Skype), Maggie has Lisa, Neal has Twitter and Leona and Rebecca will probably get high and make-out later. There’s only one question hanging over the season finale, that will no doubt be long forgotten before season three: “Who won in the Michigan 1st??”