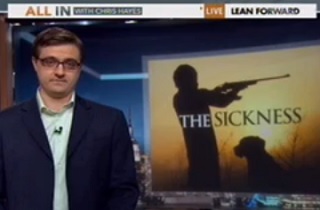 On Thursday night’s All In, host Chris Hayes tackled the difficult story of Caroline Sparks, the Kentucky two year-old who was accidentally shot and killed by her five year-old brother on Tuesday. It’s a story that stands alone in a clearing amid the forest of the issues we think about when it comes to guns; there’s no background check, or waiting period, or assault weapons ban that could have prevented it. There’s no bad guy. Standing before a hunting graphic emblazoned with the words “The Sickness,” an uncharacteristically fired-up Hayes delivered a commentary that challenged the foundational assumptions we make about gun culture when we talk about firearms regulation.

He began the segment by describing the current state of play in the fight for gun reform, and the likely celebratory goings-on at the annual NRA convention in Houston this week. He urged attendees of that conference to “spend time tonight, tomorrow and all through this conference, thinking about and talking about Caroline Sparks, a 2-year-old Kentucky toddler accidentally shot to death this week by her 5-year-old brother. Not with a gun the 5-year-old found laying around somewhere, with his own gun.”

It turns out 5 year-old Kristian Sparks shot and killed his sister with something called a Crickett rifle, a gun manufactured by Keystone Sporting Arms, LLC, and marketed to young children.

“I have a young daughter,” Hayes said. “I can only imagine what Caroline Sparks’ parents must be going through. I don’t know them, and don’t want, for a moment, to judge them. They are, in a small instance, part of a broader gun culture relentlessly stoked, supported, prodded, and pushed by the gun industry and the NRA, the folks sitting in that ballroom in Houston. And it’s a culture that they tell us, every time we try to have a political discussion about guns, that we need to respect, as though they’re a religion that we need to tread carefully around.”

He added, “But that’s a culture that even seems to embrace this,” and played clips from ads marketing the Crickett.

“That’s a gun designed, manufactured and marketed for children,” Hayes continued. “That’s the kind of gun Caroline Sparks’ 5-year-old brother was given as a gift last year, and accidentally shot and killed her this week.”

This is where Hayes absolutely nails it. “We don’t manufacture or market alcohol to children, or steak knives, or drugs, or cigarettes, or jugs of liquid Drano,”he said, but “apparently we’re all supposed to be okay with gun companies designing and marketing deadly weapons for kids, because that’s part of this culture, introducing them to guns early on, passing on this sacred tradition.”

“When I read the story of Carolyn Sparks,” he continued, “I’m not part of gun culture, and I try be open minded as we have this conversation across a vast country, with disparate habits and norms and rituals. There is something dark at work here, something folks that are part of gun culture should be talking about. If gun culture is the foundation for the kind of politics we have, which is to have no regulation at all, even if they’re designed to save the lives and limbs of gun owners themselves. If the politics are the kind of culture that says it’s okay to give a 5-year-old a gun, I’m sorry, we need to talk about this culture. It can’t be the elephant in the room. The people who need to start that conversation and own that conversation, about what gun culture is and what it should be, are people who are part of that culture, the folks who, right now as I’m speaking to you, may be drinking cocktails and celebrating victories at the Hilton in downtown Houston.”

I almost don’t want to add anything to that, because it’s too good. The artificial horizon on the gun debate in this country is all screwed up. We sit around having straight-faced discussions with these people about whether or not it’s a good idea to see if someone’s a convicted murderer before we sell them a gun, while tens of thousands of people die every year, including children. Chris Hayes is going to get a lot of shit for this commentary, because we’re supposed to be trying to build bridges with these people, but these are our children, too. We need to get across that bridge and learn these people something.

The loss of Caroline Sparks will weigh heavily on her family, and the other members of the gun culture will likely shake their heads and say, “Yeah, but I’m a safe, responsible gun owner,” and maybe they are, but maybe the Sparks’s were, too. Everybody who owns a gun thinks they’re the safest, most responsible gun owner in the world, and even if they are, they’re only safe until they aren’t.

A few weeks ago, a sheriff’s deputy, who was also a resource officer at two different elementary schools, was showing his gun collection to a friend when, in an instant, his 4 year-old nephew grabbed one of the guns and shot the man’s wife dead. I guarantee you that man thought, every time he ever read a story like this, that such a thing could never happen to him. These sorts of personal experiences weigh heavily in how people view guns, but even the tens of thousands who die each year aren’t enough to make a dent in the understanding of those who haven’t been touched by this kind of tragedy.

The day after Deputy Fanning’s wife was shot, another shooting occurred, right up the highway from where I live. Brandon Holt, a 6 year-old from Tom’s River, NJ, was playing with a 4 year-old friend. The younger child went into his house, brought out a .22 rifle, and shot Brandon dead from 45 feet away. Brandon’s parents didn’t assume the risk of having that rifle in the house, but they’ll pay for it for the rest of their lives.

Chris Hayes has a very young daughter, and he lives in the city. Before you get all angry at him for challenging this sacred gun culture, keep in mind that he’s assuming the risk of every idiot who lives within a stray bullet of him, against his will. I’m not even sure that any parent should be able to assume that risk for their own children, but if they’re going to assume it for mine, then we’re gonna have a talk.

That doesn’t mean no one should own a gun, but it is clear that gun ownership is going wrong for far too many people, and so just as gun owners resent liberals like Chris Hayes arrogantly telling them what’s what, maybe they could look around at what’s happening, and entertain the possibility that they are not infallible, and even if they were, stuff still happens. I don’t want anyone to die from gun violence, but especially not people who didn’t sign up for the risks of gun ownership.