The Virtuous Beauty Of Nuclear Weapons And Obama’s Simplistic Worldview 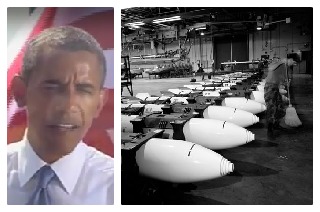 Predictably, in his Berlin address on Wednesday, President Barack Obama called for a bilateral reduction in the nuclear arsenals maintained by the globe’s most responsible atomic nations. He has made this pledge before, declared it a pillar of his foreign policy doctrine, and done little to pursue it save for unilateral reductions in America’s nuclear arsenal. He brings it up now as a perfunctory nod toward a principle clung to with religious fervor by his progressive and internationalist base. Also predictably, Obama was cheered when he made this pledge by the crowd of young Berliners; German youths have a rich tradition of protesting ultimately beneficial changes to American nuclear deterrence policy.

The president urged the globe to move “beyond Cold War nuclear postures,” bizarrely, by calling for what is essentially a new SALT treaty. A “Cold War mindset,” which the president and his supporters regularly mock in those who accurately identify a strain of expansionist and anti-Western doctrine in Russia’s conduct of its foreign affairs, is easily recognized in Obama’s speech. Safeguarding against nuclear proliferation is, of course, a priority. Keeping those weapons out of the hands of rogue nations or state sponsors of terror is a critical and laudable goal for the West. But the reduction of American or Russian (or Chinese, or French, or British, or even Israeli) nuclear weapons accomplishes nothing. It is feel-good politics designed to appeal to the reflexively anti-nuclear international left. What’s more, the fanciful goal of eliminating all nuclear weapons would make the world a substantially more dangerous place.

It was the late Kenneth Waltz, the famous international relations theorist and University of California, Berkley, professor who passed away just last month, who first identified the stability that nuclear weapons impose on the global order.

The father of “rational deterrence theory” postulated that the fundamentally anarchic international system (by definition, interstate interactions are not governed by any system of laws but merely expected behavioral norms which can be and often were violated) was made more rational by the slow and inevitable spread of nuclear weapons.

In The Spread of Nuclear Weapons: More May Be Better (Adelphi Papers, 1981), Waltz argued that the deterrent that nuclear weapons have on the primary actors in a bipolar system force those actors to be more cautious about allowing conflicts to escalate.

Nuclear weapons have been the second force working for peace in the post-war world. They make the cost of war seem frighteningly high and thus discourage states from starting any wars that might lead to the use of such weapons. Nuclear weapons have helped main¬tain peace between the great powers and have not led their few other possessors into military adventures.

Waltz did, however, identify a scenario in which the proliferation of nuclear weapons could result in destabilization and a higher likelihood of conflict – it is precisely the circumstance that Obama chose not to emphasize: proliferation to rogue states with a penchant for blackmail.

If nuclear weapons make the offence more effective and the blackmailer’s threat more compelling, then nuclear weapons increase the chances of war—the more so the more widely they spread. Lf defense and deterrence are made easier and more reliable by the spread of nuclear weapons, we may expect the opposite result.

“Nuclear weapons and an appropriate doctrine for their use may make it possible to approach the defensive-deterrent ideal, a condition that would cause the chances of war to dwindle,” Waltz observed. “Concentrating attention on the destructive power of nuclear weapons has obscured the important benefits they promise to states trying to coexist in a self-help world.”

Waltz’s theory has been put to the test on many occasions and has proven prescient. Regular and sprawling military conflicts between South and East Asian states over the course of the 20th Century ceased after each actor acquired a nuclear deterrent. The provocations that regularly threaten the peace between India and China or India and Pakistan are no longer resolved by the use of those states’ respective militaries.

Indeed, only the nations that do not face regional threats have even given up their nuclear deterrent. When South Africa’s apartheid government fell and the state no longer found itself surrounded by adversaries, Pretoria dismantled its nuclear program. Argentina and Brazil abandoned their atomic weapons programs following a series of negotiated de-escalation agreements. These choices were guided by strategic concerns, not humanism or theoretical political goals.

Waltz, like any citizen of the world observing the happenings of mortal men from the lofty perch of academia, was not a kneejerk defender of ephemeral American foreign policy objectives. True to his theory, he defended the Iranian Mullahs’ quest for a nuclear deterrent. Though he conceded the best option for Iran would be to follow a Japanese model and not test a weapon but merely maintain the infrastructure to build one quickly. If Iran signaled that it was about to attempt a nuclear break out, it would likely invite preemptive Western or Israeli intervention – a scenario that Waltz did not confront directly.

Critics of Waltz’s theory have advanced meritorious arguments in the past. Some have lamented the fact that North Korean authorities and supporters of the DPRK have cited Waltz to justify Pyongyang’s acquisition of a nuclear deterrent. Iran’s pursuit of the bomb is likely to end in a bloody, preemptive conflict if they do not break out with a functioning fissionable device first.

The notion that nuclear weapons are wholly evil is one that is advanced by politicians who underestimate the intelligence of their audience – Today, President Obama did just that.