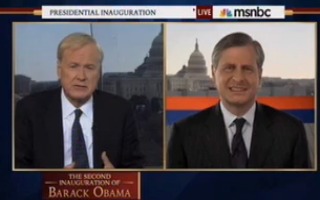 TIME Magazine reporter Jon Meacham joined MSNBC host Chris Matthews on Monday for President Barack Obama’s second inauguration. Both Meacham and Matthews compared Obama to President Ronald Reagan and asked if he can achieve a lasting legacy in his second term through compromise with his opponents. Meacham said that he thought so because, like Reagan whose formative experience in life came from being a labor organizer and an actor, Obama’s background is that of a college professor. Professors, Meacham said, are able to ‘think in more complex terms’ and ‘reach more nuanced positions.’

RELATED: Joe Scarborough: ‘Worst-Kept Secret In Washington’ Is That Obama Is A ‘Lousy Manager’

“There is a certain resemblance on the other side of the political spectrum to Reagan,” Matthews said of the president. “He certainly wasn’t a rightwing president towards the end, except for Iran-Contra of course.”

Matthews asked if Obama could seek and achieve compromise with his political opponents on big legislative proposals like tax code and immigration reform.

“I do think so,” said Meacham. He said that Reagan’s experience as a labor organizer ensured that he had a long history of taking 50 percent of what he wanted as a victory. This history of compromise allowed him to be an effective president.

“What is Barack Obama? In life, he is a writer and a professor,” Meacham said. “Writers and professors think in more complex terms. They reach more nuanced positions. And I think he knows – I think president Obama knows, because at heart he’s storyteller and an analyst – that if he wants history to remember his presidency well, he’s got to make these compromises.”