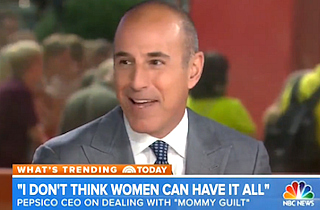 On Thursday Today producer Tammy Fine defended host Matt Lauer’s question to General Motors CEO Mary Barra last week, in which he asked her about juggling the duties of being CEO and a mother. Fine, who worked with Lauer on preparing for the interview, said the question had been raised by comments from Barra herself about missing her daughter’s prom, and struck a personal chord with her as a working mother.

Her defense came just hours after the show brought in Kathie Lee Gifford and Martha Stewart to discuss the comments.

Fine rejected the criticism that the question sent a bad message to youth about having to choose family or career.

“I am of a generation of women who were told we could do both — and so I did,” Fine wrote. “I received two masters from Ivy League institutions; I worked on Capitol Hill early in my career and for the last 20 years at NBC. I am here to say, man or woman, mom or dad, you can’t do it all — and young people should know this.”

“I did and still do believe the question needed to be asked,” she concluded.

Watch the panel discussion from this morning below, via NBC: