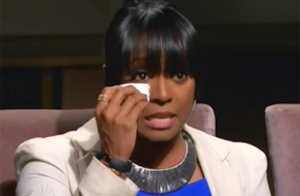 In an instance of the worst timing possible combined with the most insensitive silence, last night’s premiere of The Celebrity Apprentice featured Donald Trump firing Keshia Knight Pulliam, who played Ruby Huxtable on The Cosby Show, for not calling her famous TV dad-turned-alleged-serial-rapist.

The episode, produced over a year ago, challenged a group of celebrities to host a bake sale and, to raise a boatload of money even faster, required them to call their celebrity friends. So when project manager Pulliam awkwardly refused to call Cosby, then known as a nice puddin’ pops guy who happens to also have a boatload of money, she was called out by Trump during the boardroom.

While the episode was taped well before Hannibal Buress brought the rape allegations back to public scrutiny, the timing, it hurts. As Vulture recaps, Trump’s interrogation brought Pulliam to tears:

“Did you call Bill?” the elder Trump asked her.

“I did not,” Pulliam said, crying. “I have not talked to Bill Cosby on the phone in I don’t know how long. So for me to pick up the phone, having not talked to you for five years, except for when we run into each other for a Cosby event — I feel that’s not my place to do.”

That defense wasn’t good enough for Trump, who went on to fire her, specifically because she refused to call Cosby. “I really believe, if you’d called that gentleman, he would’ve helped you, even if you hadn’t spoken to him in years,” Trump said, “because you were an amazing team with one of the most successful shows ever. So I think it would’ve been a very good call to make for charity. But you have to take responsibility. I think you agree with that.”

This show was taped just before the terrible Bill Cosby revelations came to light.She still should have asked him for money-goes to charity.