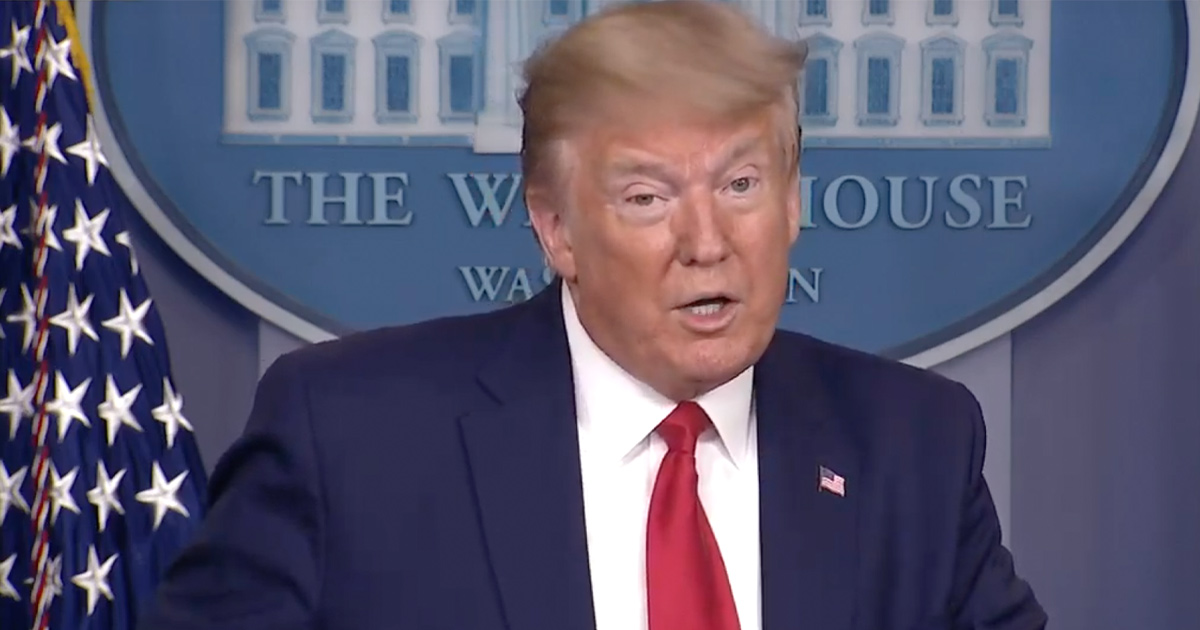 As President Donald Trump railed against the “fake news media” again on Monday morning he falsely claimed singular authority over state governments in deciding when the country reopens from the coronavirus pandemic.

“For the purpose of creating conflict and confusion, some in the Fake News Media are saying that it is the Governors decision to open up the states, not that of the President of the United States & the Federal Government,” Trump said. “Let it be fully understood that this is incorrect. It is the decision of the President, and for many good reasons. With that being said, the Administration and I are working closely with the Governors, and this will continue. A decision by me, in conjunction with the Governors and input from others, will be made shortly!”

….It is the decision of the President, and for many good reasons. With that being said, the Administration and I are working closely with the Governors, and this will continue. A decision by me, in conjunction with the Governors and input from others, will be made shortly!

Trump was responding to recent media analysis on how state and local officials, not the president, have the power to determine when their areas roll back social distancing guidelines. The president has repeatedly pushed for a swift return to normalcy throughout the pandemic, but as Reuters points out, individual states have taken the lead in mandating and enforcing anti-coronavirus policies.

The 10th Amendment of the U.S. Constitution says “The powers not delegated to the United States by the Constitution, nor prohibited by it to the States, are reserved to the States respectively, or to the people.” As such, it’s quite questionable whether Trump has the power he claims to make states reopen their economies and force the country to resume normal functionality.

This being the case, loads of people responded to Trump with reminders about federalism and the concept of states’ rights.

All month, I've been wanting to write a federalism explainer for the journalists and other liberals who were all "this is bizarre that STATES are taking the lead on a matter of public concern." Now, I need to expand the audience for the piece. https://t.co/pRuOHPQX6g

1. Trump has only issued guidelines urging Americans to practice social distancing & not gather in large groups
2. When I asked Trump earlier this month why he wouldn't urge governors w/o stay at home orders to issue those, he cited the Constitution & claimed it wasn't his role https://t.co/S5pziym1zq

A lot of us have been defending and extolling Trump's respect for federalism these past few weeks. He just blew that to smithereens and made us look stupid. Thanks a lot. Nicely done. https://t.co/AdrVtIESME

Unitary statism to own the libs. https://t.co/EpMU29xq3l

The man is Constitutionally illiterate. Such a deep ignorance of how federalism works. Separation of powers is just that, separation of powers. Trump does not have the authority to overrule governors. Clueless. Lethal incompetence. https://t.co/snKo0ApqUM

When it comes to PPE and ventilators, Trump says the states are responsible.

When it comes to reopening the their economies, though? Apparently he's in charge of that. https://t.co/TdrDnxflud

(at this rate, he'll be arguing for single-payer healthcare by Memorial Day) https://t.co/jgRINXiCco

No.
None of this is true.
He has no idea what he is talking about.
But apparently his idea of federalism is that states do the heavy lifting and get all the blame and the president gets to shirk responsibility, declare victory and claim credit whenever he wants to. https://t.co/7OO3lBWJui

…this is not true https://t.co/S5qlHaAYNG

From @PeteWilliamsNBC: “For the purpose of eliminating confusion, here are the facts. The authority to require businesses to close in a public health crisis is what is known as a ‘police power,’ and it is reserved by the Constitution to the states, not to the federal government.” https://t.co/Z5jryxgRnY