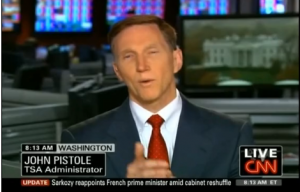 There’s been a lot of grumbling about the TSA’s new pat-down procedures lately—people say they’re far too intrusive, especially when it comes to “crotchal area” examinations. A man trying to board a flight at San Diego International Airport even filmed his encounter with the TSA, saying that their security screening felt like “a sexual assault.” It’s no surprise, then, that the TSA is now trying to defend itself against its detractors. This morning, TSA administrator John Pistole attempted to do just that when he stopped by CNN to discuss attitudes toward full-body scans and general security concerns with anchor John Roberts.

Pistole and Roberts’s talk was measured and brief. Unfortunately for the TSA, though, it probably won’t win over any angry passengers. In essence, Pistole just said that his organization is only trying to screen people as thoroughly as possible to ensure that “there’s not a group of boxcutters, or liquid explosives, or underwear bombs, or shoe bombs, or whatever” getting on board a plane. Though agents try “to be sensitive to individuals issues and concerns,” he added, “the bottom line is everybody who gets on that flight has been properly screened.”

Roberts and Pistole then briefly discussed John Tyner, the aforementioned man who filmed his screening in San Diego. Pistole was unapologetic about Tyner’s plight: “The bottom line is, if somebody doesn’t go through proper security screening, they’re not going to go on the flight,” he said again. The only potentially enlightening part of the interview came when Roberts asked Pistole why pilots are subjected to the same screening procedures as passengers, and Pistole replied by saying that the TSA does believe that since pilots are “a trusted group in so many ways,” it does make sense to have them go through a “different type of screening.”

Watch Pistole’s CNN appearance below, or read a summary of it (and the issues surrounding the TSA) on CNN.com.