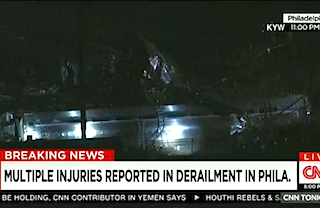 During the 11 p.m. ET hour Tuesday night, when Philadelphia Mayor Michael A. Nutter delivered his press conference, CNN’s coverage of the deadly Amtrak derailment had a higher rating in the 25-54 demo than Fox News. CNN’s broadcast, anchored by Don Lemon had 259K viewers in the demo compared to 228K for Fox, with Megyn Kelly.