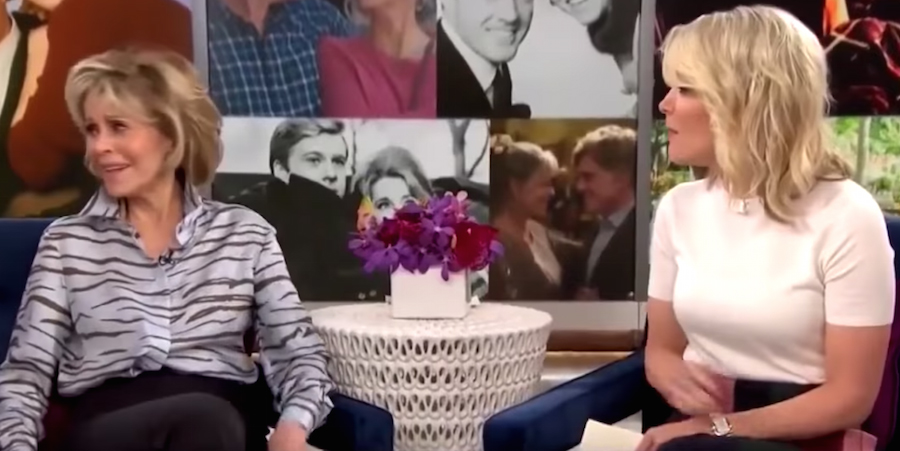 In case you need a little break from government shutdown madness, it seems as though Megyn Kelly and Jane Fonda are feuding. It all started a few months back, when Kelly brought up Fonda’s plastic surgery during what was supposed to be a puff piece interview on TODAY. Fonda did not take kindly to that line of questioning, telling Variety that it showed “she is not a good interviewer.”

This morning Kelly struck back, devoting an entire segment of her morning show to denigrate Fonda, even alluding to her one-time nickname of “Hanoi Jane,” due to her anti-war actions during the lengthy conflict in Vietnam more than 40 years ago.

“This is a woman whose name is synonymous with outrage. Look at her treatment of military during the Vietnam War. Many of our veterans still call her ‘Hanoi Jane,’” Kelly said. “By the way, she still says she is not proud of America.”

Folks on Twitter have taken note of the burgeoning feud, many reacting with confusion, others taking note of many of Kelly’s controversial past statements, including that one time she pronounced that Santa Claus, who does not exist, is white:

Jane Fonda is a feminist icon, an artistic genius, an exercise mogul, a national treasure. Megyn Kelly is famous for assuring children on a 10pm cable news broadcast that Santa Claus is white.

I love that NBC paid $40 billion to sign up Megyn Kelly and her idea of good morning TV is "relitigate the Vietnam War" https://t.co/q7uZgJqMeN

Gosh @megynkelly. You are trying to shed the taint of Fox News. Then you fall back on calling her "Hanoi Jane" when @Janefonda criticizes you. Big mistake. Is the @TODAYshow brand really about right-wing culture war tropes now? https://t.co/6j9kYvVGRx

Good for Megyn Kelly. This might be the first time (at least in a long while) that a daytime audience has heard about Jane Fonda's traitorous behavior. https://t.co/dHO9sFWshI

Is Megyn Kelly *REALLY* bringing up "Hanoi Jane" on @TODAYshow? My God… pic.twitter.com/NQvTrf0WtC

Wait… That’s your clapback to Jane Fonda, @megynkelly?! It took you months and an army of producers to come up with a moniker that was used in the 70s?! That’s the best you’ve got??? pic.twitter.com/euxqZV1Mye

2. Just got this message from a former Fox News colleague of Megyn’s: “Just shows that FNC never made her do anything…this is who she is. Also, if Jane Fonda is so horrible and offensive and an America hater why did Megyn have her on?”

Megyn Kelly is the Phi Phi O’Hara of NBC

chill way to respond to criticism there, meg

As of this writing, neither Fonda or Kelly has responded to this latest salvo.