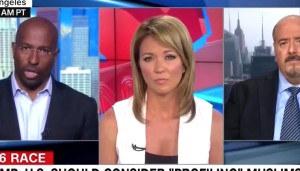 Jones pointed out this afternoon that Muslims are not the primary perpetrators of mass shootings:

“I just think it’s really interesting that we’re talking about racially profiling in the context of mass shootings,’ he said. “The vast majority of the people who are doing the mass shootings in America aren’t Muslims at all.”

“If I came on TV and said let’s start racially profiling white men, let’s start racially profiling young, white men who are loners with bowl haircuts, people would think, ‘Wow, that’s a pretty unfortunate conclusion for you to come to.’ If a Christian shoots somebody, we don’t say a Christian shot them. But if a Muslim shoots somebody, we say a Muslim shot them. I think that’s starting to muddy the waters,” he concluded.