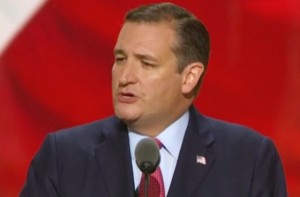 Ted Cruz took the stage at the Republican National Convention and he very noticeably avoided endorsing Donald Trump. That… did not work out well for him.

He briefly congratulated Trump at the top for winning the nomination before talking very emotionally about the Dallas shooting and how every American should be thinking about how they can fight for a better country for their children.

But at one point, he said, “We’re fighting, not for one particular candidate or one campaign…” It’s unclear if he was referring to the primaries or today.

He went through the differences between the Democrats and Republicans, pushed a very conservative agenda, and declared (in as close to an endorsement of Trump’s policies as he got tonight), “Build a wall to keep America safe!”

However, Cruz went on to declare, “Don’t stay home in November!… Vote your conscience!”

But as he continued to speak, people started shouting and booed wildly to drown him out. Cruz still pressed on.

As Cruz finished, there were tons and tons of boos that flooded through the room. (Oh, and Trump showed up in the room as he was wrapping up.)

HEIDI CRUZ escorted out by security as crowd gets angry at Cruz for his speech. One Trump supporter shouting "Goldman Sachs!" at her