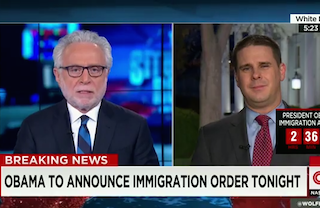 When President Barack Obama makes his speech to the nation tonight announcing his executive action on immigration, Americans will be able to watch it on cable news, as well as the Spanish-language channels Univision and Telemundo, but it will not be shown on the major broadcast networks — ABC, CBS, NBC and Fox.

As CNN’s Brian Stelter reported this week, the White House “put out feelers” to see whether the big networks would be willing to disrupt their regular programming, during November sweeps, to carry the president’s address. But after receiving a lukewarm response, they decided not to formally request the time on those stations.

So, when White House Senior Adviser Dan Pfeiffer appeared on CNN Thursday evening, Wolf Blitzer asked him how he felt about the apparent “snub.”

“It’s important to understand, this is 2014, you have to take a different approach to communications,” Pfeiffer said, after thanking CNN for covering the speech. Instead of focusing on network TV, he said the White House chose the time assuming that many people would watch on their “smartphones, laptops and tablets.”

Asked if that means he doesn’t “really care” if ABC, CBS, NBC and Fox carry the speech, Pfeiffer said, “the more the merrier” but added, “we have a lot of ways to get our message out.” He noted that the preview video Obama posted on Facebook this week has been seen by about 3.5 million people so far.

Finally, as for Univision delaying the start of its Latin Grammys to show Obama’s speech to its larger Latino audience, Pfeiffer would only say it was a “happy coincidence.”