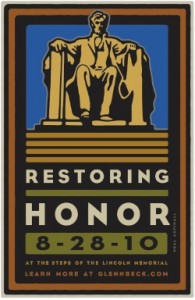 The past couple of nights, Keith Olbermann has done lengthy reports on Glenn Beck’s “Restoring Honor” rally. He’s pointed to Fox News’ claims that they won’t promote the rally and claimed hypocrisy as Beck’s been all over Fox & Friends and the O’Reilly Factor talking it up. However, at the end of Olbermann’s piece, we had one question: who’s really talking about the rally more, Fox News or MSNBC? Fortunately, with the help of our friends at TV Eyes, we can find out.

Using the past six days (Sunday morning at 12 am to Thursday night at 11:59 pm) we checked for references made to the rally or Beck on both networks. At first we searched for the phrase “Restoring Honor” and found that, in that time period, it had been referenced 15 times on Fox News and 11 times on MSNBC which makes sense. Then we remembered that MSNBC rarely references the rally by its name; frequently speaking of it as “Glenn Beck’s rally” or “Glenn Beck’s event.” When we broadened our search accordingly, the results were surprising:

So why is MSNBC talking about Beck and his rally so much when publicity, good or bad, could only help him? Well, it probably has a lot to do with the concept of “the other.” Last night, Countdown also had a great segment on Ken Mehlman’s admission of how the GOP successfully vilified gays in the 2004 and 2006 elections and Olbermann connected it to the current furor over immigrants and Muslims. Just as this Rove-ian tactic has worked wonders in politics, its also been just as successful in politics news.

Watch prime time on Fox News and MSNBC and it’s almost entirely based on building up bad guys. Fox News does everything except play scary organ music when they show Imam Feisal Abdul Rauf while Olbermann repeatedly reminds viewers that Beck once made fun of his mother…his dead mother! Obviously this is not a new observation, but it’s one that helps explain why MSNBC would discuss one of their rival’s biggest draws twice as much as the rival in question.

We aren’t condemning either network for promoting or demonizing Beck’s rally. In fact, we should probably thank both networks for covering it as much as they have. Really, any second not wasted on the mosque debate should be considered a victory at this point.

Watch one of Olbermann’s segments on the rally below: