Christopher: Why MSNBC Should Tell Alec Baldwin to Go F*ck Himself 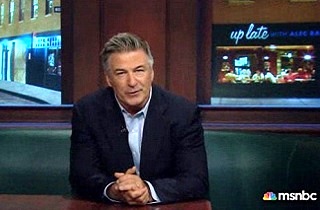 As someone who is already on record as not watching Alec Baldwin‘s new MSNBC show Up Late with Alec Baldwin, I have very little to offer in the way of pressure for Phil Griffin to rid himself of the brilliant comic actor’s toxic presence on his network, beyond a gleeful “I told you so.”

What I can offer is a corrective to the faulty rationales being offered by the likes of conservative media critics and disgruntled ex-employees like Keith Olbermann.

First, though, let me be clear that I generally oppose firing media personalities over speech issues, but the alternate approach that I prefer, forcing the offender to face the music on the air, is rarely contemplated. In MSNBC’s case, for all the reasons I’ve stated before, Baldwin is a poor fit for a network that is supposed to value tolerance and diversity. Including bigotry in your definition of tolerance and diversity is someone else’s game, not MSNBC’s. On that basis, Baldwin’s hiring should have been stopped before it started.

This isn’t about extracting a pound of flesh from a personality I already didn’t like, either. I have long been, and remain, an admirer of Baldwin’s acting talent and comic chops. His show features neither, though, and rests solely on the IRL temperament that results in these outbursts of verbal violence. The closest comparison I can think of is Ed Schultz‘s attack on Laura Ingraham, from which Ed only managed to save his career by delivering the perfect apology. Bldwin has displayed no such talent for sincere remorse, denying that he’d done anything wrong the last time, then including weaselly qualifiers after he did it again.

As a regular MSNBC viewer, though, my reasons for wishing that Phil Griffin would decide, on his own, to shitcan Alec Baldwin are quite different. The network’s Lean Forward mission is more than just an ad campaign, it is an appeal to a community of people who reject their own marginalization, and the marginalization of others. Notwithstanding its rigged morning show, the interactions I’ve had with the network’s hosts, contributors, executive producers, and staff demonstrate that this outreach is sincere. Quarrel about fairness or bias if you like, but there is no artifice in their point of view.

In his wholly insufficient apology, Baldwin feels compelled to mention that he was “trying to protect my family,” a signal that despite his disappointment that he “clearly” offended people, a sufficient amount of future duress might produce a similar result. What Baldwin fails to realize, and what Griffin needs to, is that while protecting his family, Alec Baldwin was attacking our families, and the family of viewers that folks like Rachel Maddow have worked so hard to connect with. Griffin shouldn’t fire Baldwin for consistency’s sake, or to appease viewers, but because Alec Baldwin has shown that either he doesn’t belong there, or that family of viewers doesn’t.

I don’t think anyone really believes that Alec Baldwin is a “homophobe,” in that he clearly supports LGBT rights, as he’s quick to remind us. But there remains some vestige of hostility, bred into him by a society that condoned fag-bashing until relatively recently, that emerges when he’s too angry to think straight. What he needs to recognize is that all the support, all the fundraising in the world doesn’t blunt the impact of words like his on, say, the millions of gay teenagers who face bullying, discrimination, and a shamefully high suicide rate. It wasn’t merely offensive, it was dangerous.

If Phil Griffin wants to keep Alec Baldwin at MSNBC, then he should have the actor devote his first post-suspension show to interviewing volunteers and subjects of an organization like The Trevor Project, and trying to learn something other than how to get a bitchin’ haircut from his gay friend.