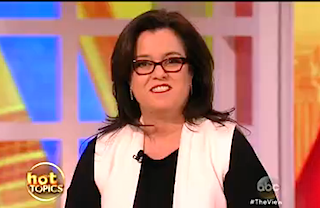 After news broke Friday night that Rosie O’Donnell was once again leaving The View following a split with her wife, it would have been easy to assume that when she returned for her final week on Monday, she and the hosts would discuss her departure. But, instead, the abrupt decision was completely ignored.

“You had a big weekend this weekend, Rosie, tell everybody about it,” Whoopi Goldberg said at the top of the show, in what seemed like an invitation to get her reasons for leaving the show out in the open. But instead, O’Donnell spent the next several minutes promoting the premiere of her new documentary, Rosie O’Donnell: A Heartfelt Stand Up.

But on Twitter following the broadcast, O’Donnell responded to those who wondered why she completely neglected to discuss the news on air, with increasing levels of frustration:

@JarrettHill @TheView – I didn't want to

@heyVlNNY – I DIDNT WANT TO – I have already – Google it

Read the full statement from her press representative below:

“I can confirm that Rosie and her wife Michelle split in November. Rosie has teens and an infant at home that need her attention. This has been a very stressful situation. She is putting her personal health and family first. ABC has been wonderfully understanding and supportive of her personal decision to leave The View. Next week will be her last.”

#TheView @Rosie that Ashley Graham is a good looking drink of water. Me not a lesbian but wow

UPDATE — 4:48 p.m. ET: In a YouTube message Monday afternoon, Rosie O’Donnell further explained why she decided not to discuss her departure from The View on air. You can watch that video here.