Zimmerman’s Brother: ‘We Have Concerns Of Having Our Phones Tapped By The Administration’
VIDEO

Zimmerman’s Brother: ‘We Have Concerns Of Having Our Phones Tapped By The Administration’ 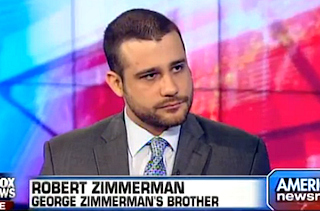 George Zimmerman’s brother Robert Zimmerman continued his series of media appearances on Fox News Tuesday morning, claiming that he and his family feared the administration might be tapping their phones, and that the Department of Justice being pressured by civil rights groups to open a federal investigation into his brother’s actions.

“We do have concerns and always have of having our phones tapped, having our phones listened to by the administration or whomever,” Zimmerman said. “A lot of the things that we do are connecting in person—that’s how we’ve managed to stay hidden for so long. It’s kind of old school, but it works…We’re back to what we were doing in March of 2012, because it’s right in everybody’s mind right now.”

Zimmerman had no kind words for the organizations that are calling for a Justice Department investigation into possible civil rights violations by Zimmerman:

“I think Eric Holder is being pressured by some groups who were calling for, initially, just an arrest. These same groups keep moving around the goal posts: the NAACP, Al Sharpton, the Rainbow Push Colaition with Jesse Jackson. First they wanted just a simple arrest and that’s it, have his fair day in court and whatever the verdict is, we’ll respect it. Then when the verdict was coming they wanted him to be found guilty. But the verdict isn’t what they wanted, so now they’re moving the goal post again, and calling on the Department of Justice to investigate him more.”

“I understand the Justice Department’s responding to pressure,” he continued. “But I think that the American people need a little bit of time to digest those two words ‘Not Guilty.’ It doesn’t mean nothing happened. I think most of the people who were upset with that outcome didn’t actually pay attention to the trial.”

Zimmerman was also asked about Juror B37, who spoke to Anderson Cooper Monday night about the jury’s reasoning behind the acquittal. Zimmerman agreed to a point with her assessment that his brother could have initially walked away from the incident, but affirmed: “The most important thing and most telling thing that she said was that this was not a case about race,and that race was not a factor in this case.”

Zimmerman said he has not seen his brother since the verdict, as he’s been in New York, but spoke nonetheless on his brother’s mindset upon being acquitted.

“Freedom is a very new notion to him,” Robert Zimmerman said. “He’s been confined not just by an ankle bracelet, but psychologically and emotionally confined to being in that courtroom every day. Seeing people try to put him in prison for the rest of his life. When that’s all gone and you’re in essence a free man, and they cut that ankle bracelet off of your ankle and the judge tells you you have no further business before the court, in that instant your reality changes. It’s very jarring.”