Tonight’s MTP Daily ended with a light little segment on the beginning of a surprise political movement that no one saw coming: Gritty.

And Katy Tur absolutely could not stop laughing.

See, it turns out that Gritty––who went from Philadelphia Flyers hockey mascot to all-purpose meme in record time––received a couple of write-in votes in races across the country. (Some people touted a report that Gritty supposedly got 69,000 [nice] votes in Pennsylvania, but alas that was a hoax.)

And clearly MTP: Daily staffers had waaaaaay too much Photoshop fun today. This is just one of the mock-ups displayed on screen for the “Gritty Revolution”: 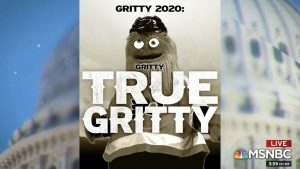