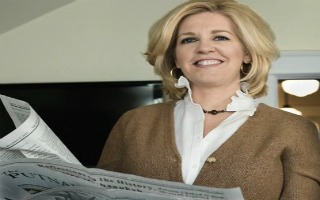 Eric Wemple, Washington Post reporter on news and media, writes on Tuesday that Fox News Channel chief Roger Ailes’ wife Elizabeth became so frustrated with her husband’s unauthorized biographer, Gabriel Sherman, that she cut off his subscription to a newspaper she runs.

Wemple writes that Elizabeth Ailes cut off Sherman’s subscription to the community newspaper, the Putnam County News and Record, when she became frustrated with his efforts to compile information on her family:

“I don’t want to get into a financial transaction with him and his credit card,” Elizabeth Ailes told this blog.

Wemple writes that The Five co-host Andrea Tantaros took to twitter yesterday to denounce Sherman who she referred to as a “harasser” and a “stalker.”

The “harasser” @gabrielsherman of NY Mag stoops 2 new low going after Roger Ailes’ wife. What do u expect from a Soros puppet?

Fox News CEO is one thing, his family – private citizens- is another But not to the harasser @gabrielsherman, aka stalker media. #waronwomen

Wemple writes that Sherman secured a New America Foundation fellowship for 2013 which led Tantaros to call him a “Soros-puppet.” He writes that Ailes is working with Fox reporter Jim Pinkerton on his authorized biography. Pinkerton, too, worked with the New America Foundation “off and on” between 2000 and 2009. “Ailes’ own book is in the hands of a former Soros puppet,” writes Wemple.

I’ve reached out to Fox News in an attempt to learn just what Sherman has done to qualify as a “harasser,” beyond conveying to the public the fact that he can no longer get his fix from the Putnam County News and Recorder. No word yet from Fox, and Sherman declined comment for this post.