A couple pointed guns at protesters in St. Louis as a group marched toward the mayor’s home to demand her resignation. https://t.co/5EqDd43QCd pic.twitter.com/KWNaif77ch

It has been about 18 hours since a St. Louis couple went viral because of their armed response to Black Lives Matter protesters in their neighborhood, but the Twitterverse still has plenty of things to say about the insane confrontation.

On Sunday evening, demonstrators marched through St. Louis’ Central West End neighborhood on their way to hold a protest in front of Mayor Lyda Krewson’s house. The mayor faces calls for resignation after she used a Facebook Live briefing to read out the names and addresses of local residents who have urged her to defund the police department.

Multiple reports state that protesters passed through a gated community during their march, and the situation escalated when a white couple stood outside their mansion and aimed a pistol and a semi-automatic weapon at protesters. The couple has been identified as Mark and Patricia McCloskey, personal-injury lawyers.

Footage from the scene shows that the McCloskeys pointed their guns at the marchers multiple times and shouted at them to get off the property. The confrontation made waves across the internet, and President Donald Trump exacerbated the viral spread by retweeting ABC’s coverage on the incident.

A video shows an unidentified couple in St. Louis pointing guns at protesters who were marching to demand the mayor’s resignation after she read the names and addresses of some residents who supported defunding the police during an online briefing. https://t.co/h3zvRrdLzl 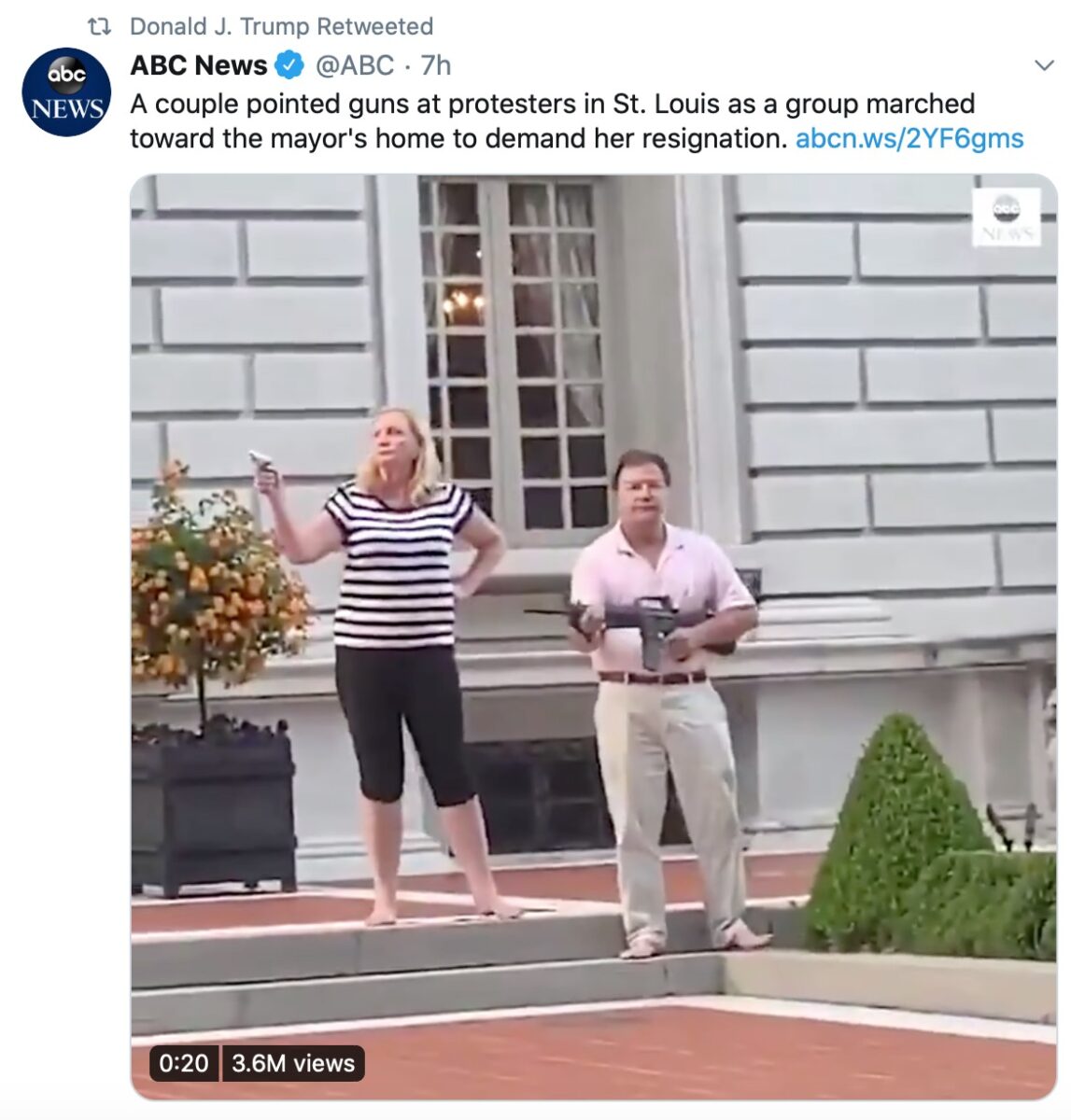 Many on Twitter pointed out that the McCloskeys did not handle their firearms properly.

The jokes will be made. The pink brooks brothers, the mansion, barefoot, etc

But before it gets lost in the snark I want to express how *INCREDIBLY* dangerous this short encounter was.

Her finger is on the trigger.
His safety is off.
He is flagging his wife/others.

I have many thoughts on the gun couple – one being that they both desperately need gun safety classes. But I will say other than religion, the gun beat/gun culture in red states is the one the mainstream media not only gets incredibly wrong – but has the most elitist disdain for.

couple of things:
1) karen’s trigger discipline is horrible. take a gun safety class plz.
2) protesters entered a private street, which isn’t mentioned by @ABC. the couple is well within their right to protect their private property, but man, way to take it from 0 to 100, guys. https://t.co/ZOpKi3A9vd

However, most of the internet did that thing it does with a situation as strange as this:

This was the PERFECT opportunity to finally use their homme-debout and they missed it smh https://t.co/nKOGhpKEWt pic.twitter.com/34nm4XNQfv

The mustard stain is just such great detail. pic.twitter.com/WiENSwfr5k

Imagine if Ken and Karen (or Ken and Barbie gone MAGA) were Black or Brown and pointing guns at a white militia or white power movement rally. What would happen? pic.twitter.com/wQA4sEKrlN

When they come for your unrealized capital gains. pic.twitter.com/sKjxExwczP

This is how you dress to take a DENNY’s hostage pic.twitter.com/ovqwMHG4zg

Honestly, rich white people being so irrationally afraid of people of color peacefully using their constitutional rights that they run out of their giant, ugly house and crazily point guns at them is maybe the most American thing imaginable.

If you shut down their country club, they’ll shut down your life? pic.twitter.com/3RybGeZd13

UPDATE: The McCloskeys have issued a statement through their lawyer — stating that they support Black Lives Matter.

JUST IN: St. Louis attorneys Mark and Patricia McCloskey release a statement, through an attorney, saying they support Black Lives Matter and they acted lawfully on their property. The couple, through their attorney, says “the agitators responsible for the trepidation were white” pic.twitter.com/4zebQqSH0y