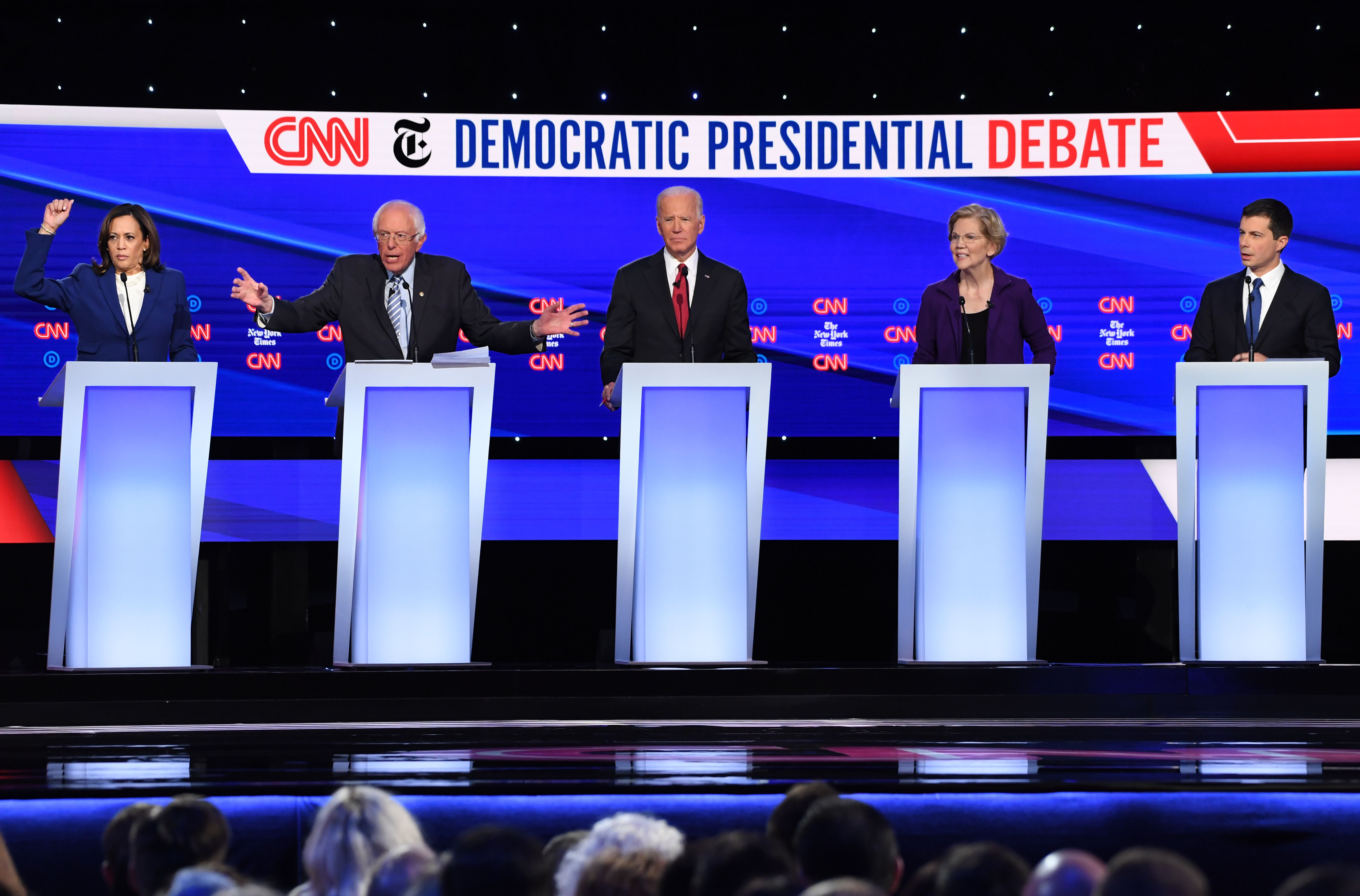 12 candidates took to a stage in Ohio on Tuesday night for the CNN and New York Times-hosted Democratic presidential debate.

The race for 2020 continued apace with intense clashes between frontrunners and sideshow candidates (we’re looking at you and your tie, Tom Steyer) alike. There were plenty of news-making moments in the three hour politics fest, and we’ve compiled the best from Mediaite’s coverage below.

The first question, asked to each of the twelve candidates on the debate stage by CNN’s Anderson Cooper, was about the impeachment inquiry of President Donald Trump.

All candidates called for Trump’s impeachment, and condemned the president with varying shades of intensity. Tulsi Gabbard, who only recently hopped on the impeachment train, was reserved. Joe Biden, who has been locked in a bitter spat with Trump over nepotism, declared: “This president is the most corrupt in modern history and I think all of our history.”

The elephant in the room, whether Biden likes it or not, was his son. Hunter had just this morning done an interview with ABC’s Good Morning America in which he pushed back on Trump’s attacks over business dealings in Ukraine. House Democrats have launched an impeachment inquiry of Trump for his efforts to have foreign countries investigate the Bidens.

“I carried out the policy of the United States in rooting out corruption in Ukraine. And that’s what we should be focusing on.”

When Cooper asked Biden about his son, Booker tried to jump in, shouting at the moderators. He was ignored, but the next time he was picked on to talk, he unleashed on his debate hosts for even asking about the alleged conflict.

“I am having deja vu all over again … because I saw this play in 2016’s election,” said Booker, senator, 2020 candidate and media critic. “We are literally using Donald Trump’s lies. And the second issue we cover is elevating a lie, and attacking a statesman! That was so offensive!

From the outset of the debate, Warren the top target of centrist candidates Pete Buttigieg and Amy Klobuchar. Mayor Pete kicked things off, with an attack on Warren’s dodge when asked how she plans to pay for her Medicare for All proposal.

Describing the moderator’s query as “A yes or no question that didn’t get a yes or no answer,” Buttigieg said Warren has a “plan for everything — except” how to pay for her health care plan.

The Minnesota Senator piled on with a brutal shot invoking Bernie Sanders: “At least Bernie’s honest here and saying how he’s going to pay for this.”

Gabbard, who threatened last week to boycott this debate, went after its hosts on Tuesday night. She accused CNN and the Times of having “smeared” her as an “Assad apologist” and a “Russian asset” because of her controversial meeting with the Syrian dictator.

“The New York Times and CNN have also smeared veterans like myself for calling for an end to this regime change war,” said Gabbard. Just two days ago, the New York Times put out an article saying that I’m a Russian asset and an Assad apologist and all these different smears. This morning, a CNN commentator said on national television that I’m an asset of Russia. Completely despicable.”

Almost every candidate on the stage condemned in strong terms Trump’s apparently improvised decision to abandon the Kurds in Syria, leaving them to a Turkish invasion.

“Our commanders across the board, former and present, are ashamed of what’s happening here,” Biden said. “[The Kurds] lost their lives. This is shameful! Shameful what this man has done!”

Biden’s speech lambasting Trump drew plaudits for its passion and moral clarity in contrast to the Trump administration’s frenzied incoherence. Though, the former vice president also fielded some mockery for a rhetorical stumble (he called Syria “Iraq”. Syria is not “Iraq”).

7. Moderators to old candidates: Why are you so old?

CNN’s Erin Burnett had a rather blunt question for Sanders: “You’re 78 years old, and you just had a heart attack. How do you reassure Democratic voters that you’re up to the stress of the presidency?”

Harris at one point called out Warren for mocking her call on Twitter to ban Trump from the platform. She called it a matter of “safety” and “corporate responsibility.”

Warren declined to join Harris’ call, despite repeated requests, stating: “I don’t just want to push Donald Trump off Twitter. I want to push him out of the White House. That’s our job.”

9. Clash of the frontrunners

Let’s ignore for a moment that the last 20 minutes of the debate were dedicated to asking each candidate about their most interesting friend (not a joke), and focus on the clash between the frontrunners that preceded that moment.

Biden kicked things off by touting his work as Barack Obama’s vice president: “I’m going to say something that is probably going to offend some people here, but I’m the only one on this stage that has gotten anything really big done.”

Sanders replied with a brutal burn: “I say this as a good friend, you got the disastrous war in Iraq done. You got a bankruptcy bill which is hurting middle class families all over this country.”